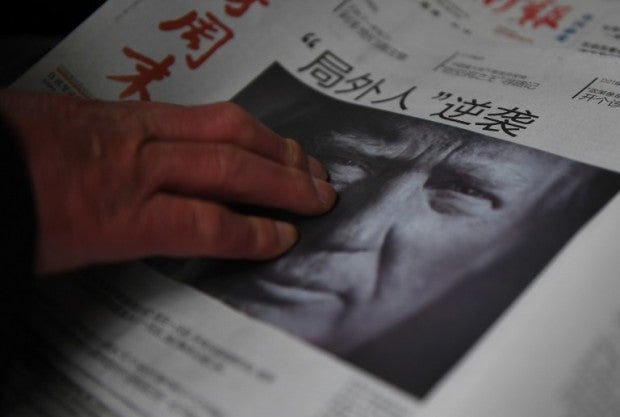 This file photo taken on November 10, 2016, shows a man buying a newspaper featuring a photo of US President-elect Donald Trump, the day after the US election, at a news stand in Beijing on November 10, 2016. The headline reads “Outsider strikes back.” Chinese media warned President-elect Donald Trump on Monday, Dec. 12, 2016, not to play with the One China Policy, calling him ‘as ignorant of diplomacy as a child.’  AFP

BEIJING, China — Chinese media warned Donald Trump Monday that the one-China policy is “non-negotiable” and dropping it could lead to Beijing supporting US enemies, after the president-elect said he might do so unless Beijing made concessions.

“The one-China policy cannot be traded,” an unsigned online commentary in the nationalistic Global Times said Monday, calling Trump “as ignorant of diplomacy as a child”.

It warned that if the US openly supports Taiwan’s independence and ramps up arms sales to the democratically self-ruled island, China could aid “forces hostile to the US”.

“Why couldn’t we publicly support them, or secretly sell arms to them?” it demanded.

The Chinese-language commentary was in response to Trump’s remark in a Fox News interview Sunday that he did not see why the US must “be bound by a one China policy unless we make a deal with China having to do with other things, including trade”.

He vehemently defended taking a call earlier this month from Tsai Ing-wen, the leader of Taiwan, which Beijing has not controlled for more than 60 years but considers a rogue province awaiting unification.

Although the United States is Taiwan’s main ally and arms supplier, it has not had official diplomatic relations with Taiwan since 1979, when it switched recognition from Taipei to Beijing.

The Global Times commentary sounded a more openly menacing tone than previous state-media responses, which had largely blamed Taiwan for the phone call and advocated a wait-and-see response.

But this time it warned that if Trump “openly abandons the one-China policy, there will be a real storm. At that point, what need does mainland China have for prioritizing peaceful unification with Taiwan over retaking the island by military force?”

The English-language edition of the Global Times quoted a Chinese scholar calling Trump a “novice” in diplomacy with a “very superficial” understanding of Taiwan and Sino-US relations.

But Li cautioned it was “too early” to conclude Trump intended to follow through on his threats.

“He’s very fickle as well, he may eat his words sometime soon.”  CBB/rga