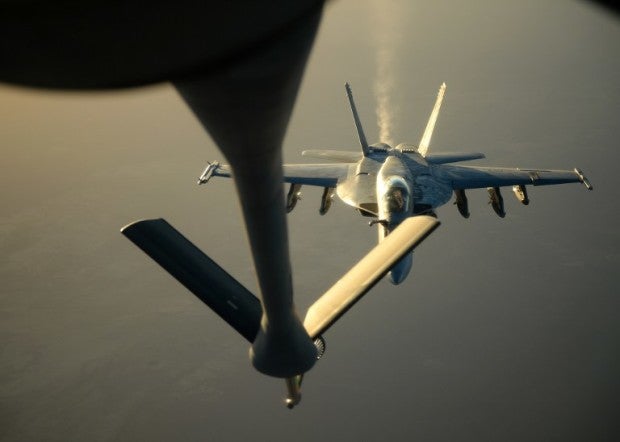 This US Air Forces Central Command photo released by the Defense Video & Imagery Distribution System (DVIDS) shows a US Navy F-18E Super Hornet approaching to receive fuel from a KC-135 Stratotanker over northern Iraq after conducting air strikes in Syria, September 23, 2014. These aircraft were part of a large coalition strike package that was the first to strike ISIS targets in Syria. AFP

QAYARA AIR BASE, Iraq — Iraqi and U.S.-led coalition forces have killed or gravely wounded more than 2,000 Islamic State of Iraq and Syria (ISIS) fighters in the battle for Mosul since October, the top U.S. commander in Iraq said Sunday.

Lt. Gen. Stephen Townsend told reporters there are still an estimated 3,000 to 5,000 ISIS fighters defending Mosul. He applauded the efforts of Iraqi security forces, who began their offensive on Oct. 17 in what has been billed a decisive phase of the anti-ISIS fight.

READ: ISIS back in Palmyra as Syian army tightens grip on Aleppo

“By our calculations, we think we have killed or badly wounded over 2,000,” Townsend said at a joint news conference with U.S. Defense Secretary Ash Carter at Qayara air base.

Iraqi security forces have been slowed in their nearly two-month-old offensive against ISIS, which has occupied Mosul for more than two years. US officials have declined to say how many Iraqi government troops have been killed in the Mosul fight.

Recapturing the city, Iraq’s second-largest, is crucial to the Iraqis’ hopes of restoring their sovereignty, although political stability will likely remain a challenge afterward.

Iraqi forces have only won back a handful of eastern Mosul neighborhoods since launching the offensive in mid-October. On Sunday they came under mortar fire as they worked to clear villages along the Tigris River to the south, part of operations to secure supply lines for a campaign that is likely to stretch into the coming year.

Townsend disputed any suggestion that the Islamic State has managed to fight the Iraqi government forces to standstill in Mosul.

After citing the estimated 2,000 ISIS casualties, he added, “I don’t think that suggests anything about a stalemate. This is a major urban area. Any army on the planet, including the United States Army, would be challenged by this fight.”

“The Iraqi army has come back from near-defeat two years ago, and now they are attacking this major city,” Townsend said. “I don’t think there is anything in there about a stalemate.” Mosul is about 250 miles from Baghdad.

Townsend said U.S. intelligence estimated before the Mosul campaign kicked off that ISIS had 3,500 to 6,000 fighters in the city. He said the current estimate is 3,000 to 5,000.

Pentagon chief Carter made an unannounced visit Sunday to the Qayara base, flying in from Baghdad after meeting with Prime Minister Haider al-Abadi and sharing lunch with American troops. It was Carter’s first visit to Qayara since it began operating as an Iraqi staging base in October.

Carter toured the air base, greeting soldiers and offering holiday wishes. He assured them the Mosul campaign is on track.

“Everything is going according to the plan of a year ago,” Carter said.

On Saturday in Bahrain, Carter announced he is sending another 200 troops to Syria to train and advise local fighters combatting ISIS. There are already 300 U.S. troops authorized for the Syria effort, and some 5,000 in Iraq.

Carter told an international security conference in Bahrain that the battle for Mosul and for the Syrian city of Raqqa, the de facto capital of the extremists’ self-described caliphate, would be crucial for defeating the group, which has claimed attacks worldwide.

“The seizure of these two cities is necessary to…put ISIL on an irreversible path to a lasting defeat,” he said, using another acronym for ISIS.

He did not predict how long it might take for Iraqi forces to prevail in Mosul, but he sounded a note of optimism.

“This is a complex mission that will take time to accomplish, but I am confident that ISIL’s days in Mosul are numbered,” he said in Bahrain.

Carter’s tenure as defense secretary will end in January if his designated successor — retired Marine Gen. James Mattis — is confirmed by the Senate as expected. As his days in office count down, Carter is making the case for keeping U.S. forces in Iraq even after the Islamic State group is dislodged from Mosul.

“Beyond security, there will still be towns to rebuild, services to re-establish, and communities to restore,” he said. The extremists, he predicted, will attempt to survive by reinventing themselves “in some other shape or form” after they lose their grip on Iraq and Syria.

In Baghdad, six separate bombings targeting mostly streets and markets frequented by civilians killed 12 and wounded more than 30 people Sunday, according to Iraqi police and hospital officials. ISIS claimed responsibility for one of the attacks in southern Baghdad in a statement posted by the group’s Amaq news agency. All Iraqi officials spoke on condition of anonymity as they were not authorized to brief the press.

Left unaddressed by Carter during his visit to Iraq was a possible change in course under President-elect Donald Trump when he takes office next month. CBB