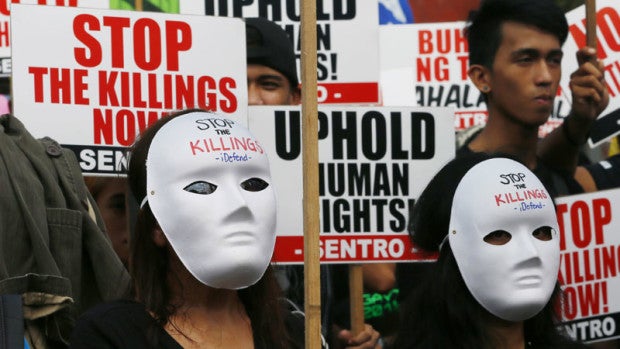 Masked protesters display placards as they gather for a rally near the Presidential Palace to mark International Human Rights Day, Saturday, Dec. 10, 2016 in Manila, Philippines. The protesters are calling on the Government for an end to extra-judicial killings in the country which already claimed the lives of more than 4,000 people. (AP Photo/Bullit Marquez)

The Commission on Human Rights (CHR) has chided the House committee on justice for passing on Dec. 6 the proposed law reimposing the death penalty “without the benefit of a full consideration of relevant submissions from all stakeholders.”

“The commission in its advisory role on matters relating to the human rights urges Congress to give regard to the fact that as a signatory to the protocol, the Philippines has bound itself to perpetually abolish the death penalty in order to finally uphold the right to life,” CHR said in a statement issued on Sunday.

The constitutional human rights watchdog was referring to the Second Optional Protocol to the International Covenant on Civil and Political Rights that binds signatory-countries to abolish the death penalty.

The Philippines signed the international agreement in 2006, when the Arroyo administration abolished the death penalty shortly before the visit of Pope Benedict XVI.

The CHR also reiterated that restoring the death penalty will violate constitutional guarantees of respect for human rights and the dignity of every person.

“The right to life of a person is the most fundamental right,” it said.

“Every person is imbued with dignity. Capital punishment by whatever method such as by lethal injection, firing squad, hanging or electrocution would constitute cruel, inhuman and degrading punishment. It does not accord dignity to human beings and has no place in a civilized society,” CHR went on.

CHR again pointed out that no studies have shown that death penalty deters crime.

“Yes, crimes must be deterred, criminals must be held to account, victims must be given justice. However, the death penalty is not the answer. No studies support it,” CHR said, stressing that “effective law enforcement and a criminal justice system that works is the most important deterrent to criminality.”

The House committee on justice voted 12-6 last Tuesday to endorse to the plenary the proposal to reinstate the death penalty for “heinous crimes.”