Impeach Duterte? Aguirre asks: What trust did the President betray? 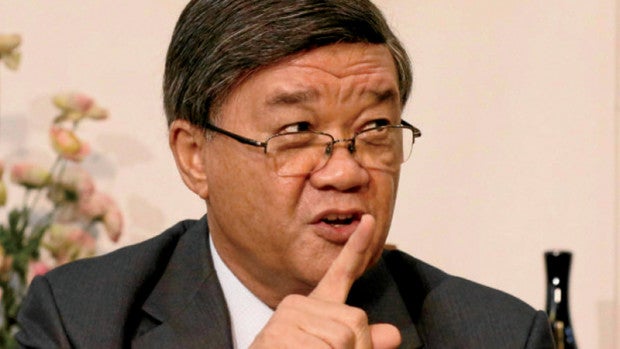 Justice Secretary Vitaliano Aguirre II on Sunday laughed off claims that President Rodrigo Duterte may be impeached for assuring policemen who killed detained Albuera Mayor Rolando Espinosa that they wouldn’t land behind bars.

Aguirre, who served as private prosecutor in the impeachment trial of the late Chief Justice Renato Corona in the Senate, said Mr. Duterte did not violate the Constitution when he defended Supt. Marvin Marcos and his men.

Marcos is the sacked chief of the Criminal Investigation and Detection Group (CIDG) in Eastern Visayas who mapped out the predawn raid on Espinosa’s detention cell on Nov. 5, which led to the mayor’s death.

Contrary to the claim of Marcos and his men, Espinosa could not have engaged in a shootout with policemen from his cell at the Leyte subprovincial jail in Baybay City, as the mayor had no gun, according to the National Bureau of Investigation.

The police claimed they were searching for a gun in Espinosa’s cell based on a warrant.

“What is impeachable about it? What trust did the President betray?” Aguirre asked reporters in an interview. “Some are just making a big issue out of it.”

Last week, the President said he believed in the version of Marcos and his men regarding Espinosa’s death even after the NBI concluded that his killing was a “rubout.”

He issued the statement despite admitting that Marcos was “tainted” and that he himself had ordered the lifting of the administrative relief of the CIDG official because he had him under surveillance for his supposed links to the illegal drug trade.

Said Mr. Duterte: “I will not allow these guys to go to prison. I don’t care if the NBI says it’s murder. Anyway, the NBI and the Department of Justice are both under [my authority].”

The NBI is the justice department’s investigative arm.

Sen. Leila de Lima, the President’s arch-critic, said Mr. Duterte’s remark was akin to providing pardon to Espinosa’s killers even before they could be formally charged.

“He has exonerated them already. That’s not even his duty because the duty belongs to the judiciary, to the court. So that’s bordering on impeachability,” De Lima said.

Sen. Antonio Trillanes IV, also a vocal critic of the President, said Mr. Duterte’s defense of Marcos and his subordinates was proof that he himself directed Espinosa’s murder.

But Aguirre dismissed Trillanes’ opinion as a mere “theory of someone who has no knowledge of the law.”

“That’s the problem with someone who pretends to be a lawyer,” he said of the senator.

The justice secretary, meanwhile, played down rumors that some NBI officials were disappointed by the President’s support for the CIDG officials despite the witnesses’ testimony and forensic evidence they gathered against Espinosa’s killers.

“I was able to talk to the (NBI officials) about it and they didn’t say anything negative to me,” Aguirre said.