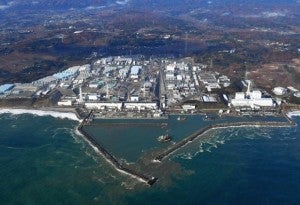 This aerial photo shows Fukushima Dai-ichi nuclear power plant in Okuma, Fukushima Prefecture, following a strong earthquake hit off the coast of Fukushima, northern Japan, Tuesday, Nov. 22, 2016. The operator of the plant, which was swamped by the 2011 tsunami, sending three reactors into meltdown and leaking radiation into the surrounding area, said there were no abnormalities observed at the plant, though a swelling of the tide of up to 1 meter was detected offshore. (Photo by KYODO NEWS via AP)

Seawater samples from Tillamook Bay and Gold Beach indicate radiation from the nuclear disaster but at extremely low levels not harmful to humans or the environment.

Massive amounts of contaminated water were released from the crippled Japan nuclear plant following a 9.0 magnitude earthquake and tsunami in March 2011.

Woods Hole chemical oceanographer Ken Buesseler runs a crowdfunded, citizen-science seawater sampling project that has tracked the radiation plume as it makes its way across the Pacific Ocean.