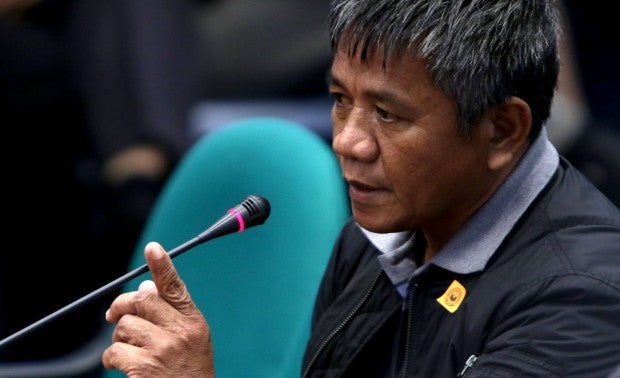 Confessed hit man Edgar Matobato on Friday asked the Office of the Ombudsman to investigate President Rodrigo Duterte for alleged involvement in extrajudicial killings in Davao when he was mayor of the city.

Matobato filed the criminal and administrative complaint through his lawyer, Jude Sabio, accusing Mr. Duterte and 27 others of murder, kidnapping, torture and crimes against

Assistant Communications Secretary Marie Banaag said the Office of the Ombudsman had already terminated an earlier investigation of the Davao killings.

“The complaint is nothing but harassment aimed at distracting the Chief Executive from performing his duty,” Banaag said in a statement.

She also said the President was immune from suit and could not be punished by the Ombudsman.

“It is noteworthy to mention that the Ombudsman cannot discipline or remove impeachable officials, which include the President. He enjoys immunity while in office,” she said.

Banaag said, however, that Malacañang acknowledges the Ombudsman’s constitutional mandate to act on and investigate complaints against government officials.

In a talk with the Inquirer, Sabio said it was high time to rethink the presidential immunity from suit.

“What if the President is a serial killer, mass murderer, or psychopath?” he said.

“I will see. I will look at the case,” she told reporters on the sidelines of an event in Pasig City.

Morales reiterated her vow to inhibit herself and “take no part in cases against Duterte and his family.”

Morales is the aunt of Mr. Duterte’s son-in-law, Manases Carpio.

On the termination of the Ombudsman investigation of the Davao killings, Morales said she was not the signatory to the January 2016 document, which was approved by Overall Deputy Ombudsman Melchor Arthur Carandang.

“I’m not a signatory to that. I understand it’s the Overall Deputy Ombudsman [Carandang] who came up with it, and it was based on a regional director of the [Commission on Human Rights] who said that it was just tsismis [gossip],” Morales said.

Sabio said the killings were  “not just rumors.”

He claimed the group consisted of Davao City police officers and some civilians.

“This group commits extrajudicial killings, or the killing of suspected criminals, such as holdup men, rapists, snatchers, drug pushers, drug addicts, and other individuals as ordered by Mayor Rodrigo Duterte,” he said.

He claimed that he was tortured when he quit the group in September 2013.

Matobato said he brought the complaint so that the Ombudsman could investigate and call to account the members of the group.

His 47-page judicial affidavit elaborated on his allegations. He said Mr. Duterte was the leader of the group, while SPO3 Arthur Lascañas was Mr. Duterte’s second in command.

“Sometimes, he also takes part in the killing,” Matobato said, recalling how Mr. Duterte “emptied two magazines of his Uzi machine pistol” on a National Bureau of Investigation agent whose vehicle had blocked the path of the killers who were on their way to an operation.

Matobato said victims were mostly abducted and then killed inside a vehicle by strangling with wire. Lascañas, he said, gave strict orders for the bodies to be chopped up.

He said “almost all” operations were cleared by Mr. Duterte, although Lascañas, whom he described as the “most powerful cop in Davao City,” acted as team leader.

Matobato claimed that he was Lascañas’ right-hand man.

He said he was paid P6,000 a month as a “ghost” contractual employee at City Hall, and his pay did not increase during 25 years that he worked with the group.

Matobato also claimed that Mr. Duterte’s son Paolo, now vice mayor of Davao, ordered the killing of a man with whom he had a traffic altercation.

The vice mayor issued a statement on Friday denying Matobato’s allegations and calling them “product of the imagination of a madman.”

Matobato’s claims were a repeat of his testimony at the Senate investigation of the extrajudicial killings in Mr. Duterte’s war on drugs.

Sen. Leila de Lima, the first chair of the Senate committee on justice and human rights, tried to show similarities between the drug killings in Metro Manila and the Davao murders, as a way of showing that Mr. Duterte was delivering on his campaign promise to roll out on a national scale his mailed-fist policy on crime in Davao.

But Mr. Duterte’s allies in the Senate stripped De Lima of her committee leadership before she could proceed and the panel, now headed by Sen. Richard Gordon, set aside Matobato’s testimony.

The committee returned a report earlier this week, stating that the investigation had found no clear proof that the killings were state-sponsored.

Gordon also recommended that Matobato be prosecuted for perjury and murder, after the hit man testified to killing a Pakistani who was suspected to be a terrorist.

In his complaint, Matobato said he believed the Davao killers were connected to the vigilante killings in Metro Manila in Mr. Duterte’s war on drugs, noting that the murders in the metropolis were carried out in a similar fashion as the ones in Davao City.

“I recognize our style of wrapping the victims in packing tape or making it appear that the victim resisted and they plant a [caliber] .38 revolver beside the body,” Matobato said.

“It’s always a .38 revolver because it would be a waste to plant a more expensive gun on the victim. Then, we fire the gun so the victim will have powder burns on his hand,” he said. —WITH REPORTS FROM LEILA B. SALAVERRIA IN MANILA AND ALLAN NAWAL, INQUIRER MINDANAO