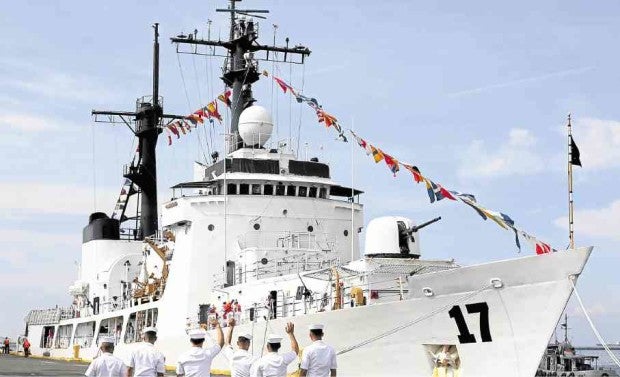 SMOOTH SAILING The BRP Andres Bonifacio, the third frigate to be given by the United States to the Philippine Navy, gets a warm welcome at the South Harbor on Friday. The warship was pledged by US President Obama last year, and it arrived despite President Duterte’s harsh words against the United States. —MARIANNE BERMUDEZ

Defense Secretary Delfin Lorenzana thanked the United States on Friday for supporting efforts to improve the capabilities of the Armed Forces of the Philippines, particularly the Philippine Navy.

Lorenzana said the former US Coast Guard cutter was “proof” of the military’s resolve and determination to upgrade its capabilities “courtesy of the United States of America.”

Kim said the transfer of the ship demonstrated the strong security partnership between the two longtime allies.

The ship, a decommissioned USCG Hamilton-class frigate, will strengthen the “protection of our territorial integrity, and maritime interest,” Lorenzana said.

“Our maritime territory is 20 times bigger than our land mass so it’s just right that we go into a program to upgrade our Navy,” he added.

He said the ship would be deployed to the Sulu Sea to fight terrorism, piracy and the illegal drug trade.

The ship, which was skippered by Capt. Brendo Casaclan, left the USCG base in Alameda, California, on Nov. 1.

It used to be the USCG’s high endurance cutter Boutwell.