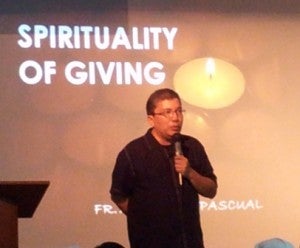 A Catholic priest who heads the social action arm of the Archdiocese of Manila is one of The Outstanding Filipino (Tofil) awardees for this year.

Fr. Anton Pascual will be feted at an awarding ceremony in Malacañang on Monday, along with other awardees, United States Ambassador Jose Cuisia Jr. and Dr. William Dar.

This was according to an advisory from Caritas Manila, a Church-run charity organization.

The Tofil aims to publicly recognize men and women, 41 years old and above, whose exemplary achievements are worthy of emulation.

The accolade seeks to give recognition to Filipinos whose dedication to their profession or vocation has made significant contribution to public welfare and national development.

Pascual has served as the president of Radio Veritas and the executive director of Caritas Manila since 2005. Both are run by the Archdiocese of Manila.

In 2010, he was awarded the Order of the Golden Heart Presidential Award from the Office of the President.

Two years later, he received the AIM Alumni Achievement International Award, the highest recognition given by the Asian Institute of Management to its outstanding alumni.

He was also honored as the Most Outstanding Cooperative Leader in Metro Manila by the Cooperative Development Authority Gawad Parangal 2015.

Pascual studied philosophy at the Our Lady of Angels Franciscan Seminary and theology at the San Jose Major Seminary at the Ateneo de Manila University.

He was ordained as a priest on March 6, 1987 and obtained his Master in Development Management at the AIM.

‘Presidency is about character,’ Duterte told

CBCP exec: Next president should have character, competence