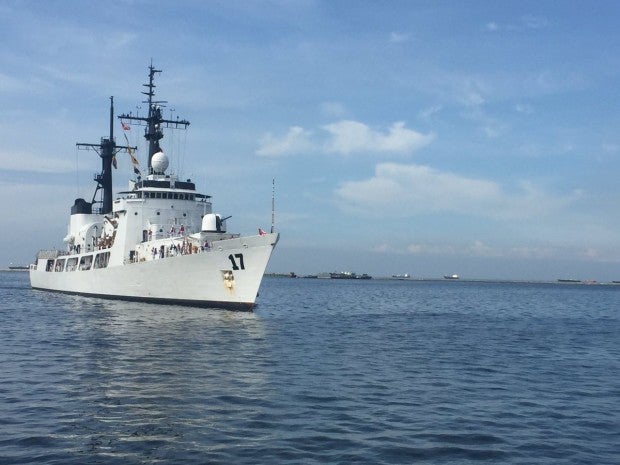 The BRP Andres Bonifacio is the Philippine Navy’s new ship from the United States. FRANCES MANGOSING/INQUIRER.net

The newly-acquired ship from the United States, the BRP Andres Bonifacio (FF-17), is being eyed to be deployed in the seas of Sulu to help in dealing with security threats, Defense Secretary Delfin Lorenzana said.

“I expect to see this ship painted in grey to ply the Sulu seas to help in the prevention of the kidnappings and piracy in the seas. This ship will certainly be a valuable platform in the pursuit of the constitutional mandate of the AFP (Armed Forces of the Philippines),” he said in his speech at the welcome ceremonies for the new ship at the Manila South Harbor on Friday.

The BRP Tarlac, the Navy’s largest vessel, has been deployed in Sulu Sea to serve as a naval blockade against the Abu Sayyaf.

BRP Andres Bonifacio, a former weather high endurance cutter of the US Coast Guard, came from a 38-day voyage from Alameda Base, California before it arrived home in Manila on Thursday night.

It is one of the two ships that US President Barack Obama pledged when he visited the Philippines in November last year. The other ship was research vessel Merville, now BRP Gregorio Velasquez (AGR702).

Lorenzana said the new ship will boost the Navy’s capabilities in dealing with maritime security concerns, emphasizing the need to upgrade it in the next few years.

“We are a maritime country, our maritime territory is 20 times bigger than our land mass so it’s just right that we go into a program to upgrade our Navy. And that will be my mission as SND for the next six years,” he said.

The BRP Andres Bonifacio is the third Hamilton-class cutter to be acquired by the Philippine Navy. The first two were BRP Gregorio del Pilar (FF-15) and BRP Ramon Alcaraz (FF-16).

Also present at the welcome ceremonies were US Ambassador to the Philippines Sung Kim and Navy Flag-Officer-in-Command Vice Admiral Ronald Joseph Mercado. IDL/rga