What blocks the Filipino woman’s path to gender equality?

(Editor’s Note: As 2016 comes to a close, the Inquirer asks in its yearender series seven questions for the new year, considering key local and international events that shaped what many regard as one of the most turbulent years in modern times. This third part is about the state of gender equality in the country and the world. Read the rest of the series at http://inq.news/2016-news-highlights.)

Filipino women made great strides in 2016 and gave pride and honor to the country in the fields of politics, international pageants, and sports. Nonetheless, hurdles remained in their path to gender equality.

Leni Robredo assumed the second highest government post in the land when she was elected Vice President in the 2016 national elections with 14.4 million votes. She is only the second woman to hold that position in the 118 years of the Philippines as an independent state.

Pia Wurtzbach, the most beautiful woman in the Philippines who was crowned Miss Universe in 2015, continued to make Filipinos proud worldwide as she served her reign this year.

READ: Back to Miss Universe duties: Pia hopes to fly to quake-stricken Ecuador

A new beauty queen, Kylie Versoza, was crowned Miss International, making her the sixth Filipino to triumph in the global pageant.

Proving that Filipino women excelled not only on a pageant stage but also in the sports arena, Hidilyn Diaz triumphed in the 2016 Summer Olympics in Rio to bring home the Philippines first Olympic medal in 20 years.

Ordinary women also scored a major victory with the passing of the anti-catcalling ordinance in Quezon City meant to curb sexual harassment of women.

READ: In QC, wolf whistles can land you in jail

The efforts of hard-working Filipino women paid off after the Philippines was cited as the most gender-equal country in the Asia-Pacific region in the 2016 Gender Gap Index published by the World Economic Forum.

READ: Philippines is most gender-equal country in Asia-Pacific 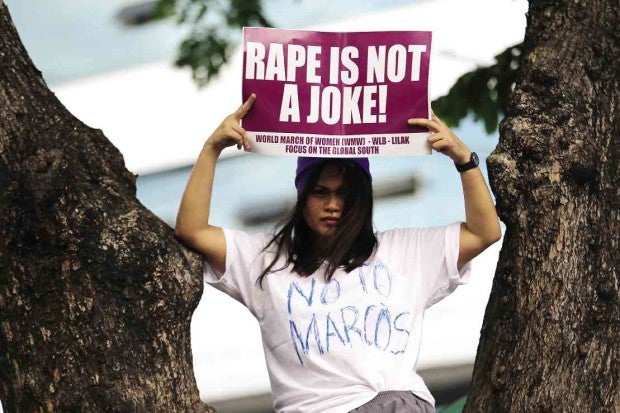 NO LAUGHING MATTER A woman reminds motorists along Timog Avenue, Quezon City, of a serious issue that presidential contender Rodrigo Duterte has treated as a joke. Women’s groups dramatized their protest with a rally on Thursday. INQUIRER FILE PHOTO

But despite these achievements, road blocks remained.

Two leaders infamous for their colorful language, which includes sexist innuendos, were elected into office.

In the country, President Rodrigo Duterte rose to power amid heavy criticism after he joked about the rape of an Australian missionary held hostage in Davao City back in 1989.

He has also admitted looking at the legs of Vice President Robredo whenever she wore a skirt during Cabinet meetings. He said he asked Robredo to wear shorts the next time but Robredo sat away from him in succeeding meetings.

Duterte joked that he had “lost the view.”

Members of media, who cover Duterte on a daily basis, have not been spared. Duterte lashed out at a reporter who asked him about his health and requested for a medical certificate amid rumors that he was ill.

Meanwhile, in the United States, business mogul Donald Trump won against Hillary Clinton in a tight race, where revelations about his sexist and misogynistic comments came to fore.

It’s not just these government leaders who have this mindset. Congressmen probing Sen. Leila de Lima’s alleged involvement in drugs threatened to show a purported “sex video” of her and her lover/driver Ronnie Dayan.

In another hearing, Dayan was grilled by congressmen to unearth the intimate details of his affair with De Lima on live television.

OPINION: What if De Lima were a man?

Female students were harassed and bullied online following their participation in protests against the burial of the late dictator President Ferdinand Marcos at the Libingan ng mga Bayani.

Can Filipino women finally hurdle these barriers and find a clear path to gender equality in 2017?