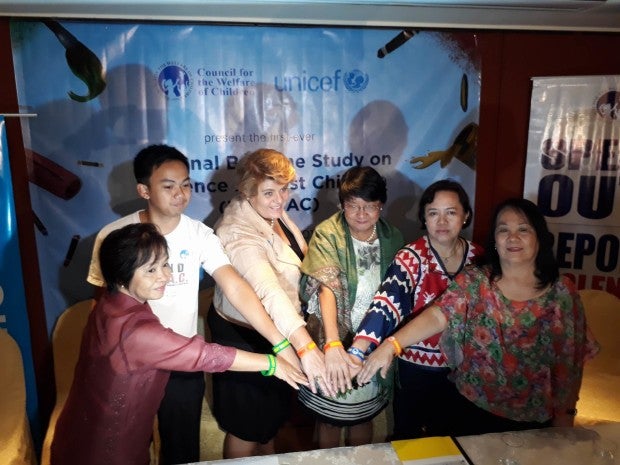 As a first step to finally eradicate the country’s alarming child-abuse cases, the Council for the Welfare of Children (CWC) released the results of its first ever National Baseline Study on Violence against Children (NBS-VAC) on Tuesday.

The five-year research, which was made possible through the support of the UN Children’s Fund (Unicef) and several non-governmental organizations (NGOs), provides data on the incidences and forms of violence committed against the Filipino children.

Aside from pointing out the cases of injustice, several keynote speakers from concerned organizations laid out priority action plans and advocacies to help the victims who were exposed to physical, emotional, sexual  and online abuse, as well as those who suffered outright neglect and trafficking.

Social Welfare and Development Secretary Judy Taguiwalo expressed the importance of making the public aware of the prevalent issues surrounding malpractices against minors.

“We at the Department of Social Welfare and Development call on our units to take a more proactive role when it comes to reporting cases of child abuse. More importantly, we want to promote a mind-set among Filipinos that child abuse is wrong and should not be allowed in a society that claims to have respect for children’s rights,” she said during a press briefing at the Manila Hotel.

The DSWD chief also urged the government to refer to the results of the research and use them as a basis to strengthen legislations, policies and programs that will prevent violence against children in the future.

At the study’s launch, a systematic summary of the findings were shared to the public for the first time, coming from over 200 child representatives from across different regions.

Among the findings of the study were:

Coming from a foreigner’s standpoint, Unicef Philippines representative Lotta Sylwander shared her concern for the country’s high VAC rate perpetuated by non other than relatives of the victims, who are supposed to be protecting them.

“It is of deep concern that so many forms of violence pervade and harm the lives of Filipino children across all settings, committed by people they trust,” she said. “The evidence demonstrates the need for expressed high-level government commitment and partner support to implement the National Plan of Action to respond to and prevent VAC.”

Dr. Bernadette Madrid, director of Child Protection Network, made suggestions to confront these issues that usually begin at the child’s own home.

“Violence can be prevented and it doesn’t have to happen, but the thing is it will need the whole of government. There are two laws that we need to pass. One is increasing the age of statutory rape because we have one of the youngest in the world at below 12 years old and it has not been changed for decades,” she said. Another is a ban on corporal punishment.

However, Madrid acknowledged the difficulties altering the punishment, since it has been a part of our societal norms and has been even been considered as acceptable behavior in most households.

Other issues discussed include the driving demand for online pornography in the country, especially in poor families that resort to exploitation of their own children in exchange for quick cash.

These injustices include sending sexual photographs and videos, and parents letting their children get physically abused.

Sylwander, meanwhile, confirmed that Filipino children are highly sought after by pedophiles all over the world. She also revealed that some of the major child pornography servers found in the “dark web” are situated in the country.

Read Next
Tulfo-Teo recommended for confirmation
EDITORS' PICK
Get exciting deals and discounts when you download the new McDonald’s App
‘House of Kobe’ launched in Valenzuela City hours before hoops star’s death
In appreciation: Kobe Bryant, a life defined by hard work
4 Ways Jollibee’s new store will serve a leveled-up kind of joy to Filipinos in the South
SM continues to send relief assistance to remote towns in Batangas
DOH warns vs eating raw meat, exotic animals amid coronavirus outbreak
MOST READ
College baseball coach, wife and daughter die in crash that killed Kobe
Kobe Bryant’s daughter Gianna also killed in crash
Kobe Bryant’s helicopter flew in fog that grounded other choppers
Hunt out for man caught ‘defecating’ in Intramuros
Don't miss out on the latest news and information.