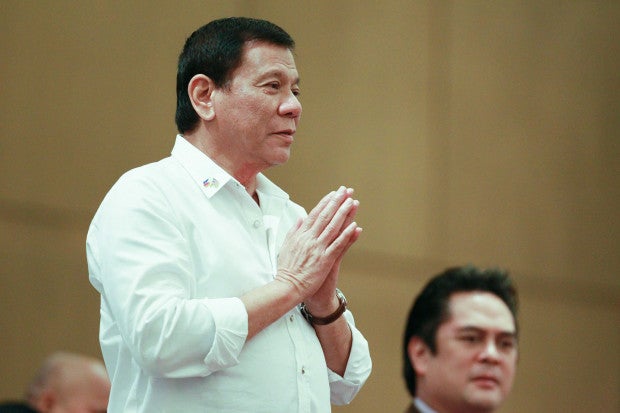 Five months into being President, Rodrigo Duterte still wants to be called “mayor” and it was a directive sent to members of his Cabinet last week by Special Assistant to the President (SAP) Bong Go.

An Inquirer source on Tuesday showed the Inquirer a text message relaying the directive of Go to staffers of Cabinet members early last week.

It said: “Per SAP Bong Go, [please] inform your principal to address PRRD as “Mayor” (instead of Mr. President) during Cabinet meetings and other meetings. Thank you po.”

PRRD are the initials of President Rodrigo Roa Duterte.

Apparently, it was the reason why Cabinet Secretary Leoncio Evasco Jr. referred to President Duterte as “Mayor Rody Duterte” in his text message to Vice President Leni Robredo relaying the directive for her to “desist” from attending all Cabinet meetings starting last Monday.

Evasco’s reference to the President as “mayor” in the text message to Robredo was not lost on social media users.

One Twitter user said that referring to the President as mayor “fails statesmanship, leadership, humanship (sic).”

Another user tweeted: “Mayor Rody Duterte ’di pa rin makamove on sa mayor status, [what] does this tell you?”

“Being called as ‘mayor’ and not ‘President’ for me is a sign that Duterte is not standing equal to the task given to him,” said yet another Twitter user.

Mr. Duterte was Davao City mayor for nearly two decades and was a single-term lawmaker before he became President.

In July, the President directed officials to refrain from addressing him “Your Excellency” on all official communications.