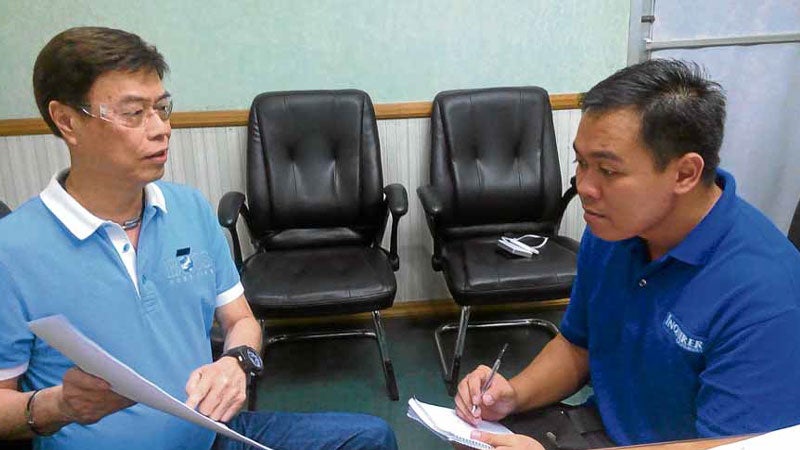 DISINFORMATION? Cebuano businessman Peter Lim says a Chinese national and namesake who goes in and out of the country may be behind the disinformation about his alleged links to drug trafficking. Limwas interviewed by Inquirer correspondent and Cebu Daily News reporter Ador Vincent S. Mayol in Cebu City. —CEBU DAILY NEWS

CEBU CITY—Cebu businessman Peter Lim on Monday night denied he knew Kerwin Espinosa and blasted the confessed narcotics kingpin for dragging his name into the illegal drug trade in the Visayas.

In an interview with the Inquirer, Lim denied involvement in the drug trade and said President Duterte and Philippine National Police Director General Ronald “Bato” dela Rosa were deceived by Espinosa.

“How could we believe a criminal, someone who is into illegal drugs? We can’t believe what Kerwin is saying,” Lim said.

“I think [the] PNP chief was misled by Kerwin and his bodyguards. And I think President Duterte was also misinformed and misled,” he added.

Lim denied he was the drug lord Peter Lim and urged
the authorities to investigate deeper and find the real narcotics dealer.

“Somebody is behind all these lies. I think Kerwin is protecting some people, including the real Peter Lim,” Lim said.

Asked who he thought was behind the disinformation, Lim said: “It might be the real Peter Lim, who is a Chinese national, who comes in and out of the country as earlier mentioned by the President.”

Lim, 71, said he began to fear for his life after Dela Rosa told a Senate inquiry on Monday that Mr. Duterte had ordered the PNP to build up a case against him and to kill him if he resisted arrest.

Lim met with Mr. Duterte in Davao City in July, days after
the President publicly identified him as one of the three biggest drug dealers in the country.

The other two were identified as Wu Tuan, alias Peter Co, and Herbert Colanggo, alias Ampang.

Dela Rosa: He’s the one

The Peter Lim identified by Mr. Duterte used the alias Jaguar, but Justice Secretary
Vitaliano Aguirre II later clarified that he was not the same Jaguar who was killed in a gunfight with police in Parañaque City on June 18. That Jaguar was the drug dealer Jeffrey Diaz, Aguirre said.

The Peter Lim identified by Mr. Duterte operated in the Visayas.

During the Senate hearing on Monday, Dela Rosa said he informed Mr. Duterte that the real Peter Lim was the Cebu businessman referred to by Espinosa.

“Right away, I reported to the President. I told him, ‘Sir, the Peter Lim, your compadre who had a photo with you, is the same person now accused as one of Kerwin’s suppliers of illegal drugs. Right away, the President said, ‘Work on it. If he resists arrest, kill him,’” he said.

The PNP chief said he was not supposed to disclose the President’s instructions, but he was compelled to do so after Sen. Antonio Trillanes IV showed a picture of Mr. Duterte and Lim standing as cosponsors at a wedding in Cebu.

“I must say that the President is very angry with that Peter Lim. He is not protecting that person,” Dela Rosa said.

“That picture was taken during a wedding and the President didn’t know the background of that person,” he added.

In the interview with the Inquirer, Lim confirmed that he met Mr. Duterte at a wedding in Lapu-Lapu City, Cebu province, and that was all.

He said he was excited about Espinosa’s appearance at the Senate hearing, expecting the drug dealer’s testimony to clear up everything for him.

But he was dismayed when the confessed drug kingpin identified him as one of his suppliers.

Lim said the real Peter Lim could be the Jaguar that Aguirre referred to in September.

But Aguirre said on Tuesday that the National Bureau of Investigation had determined that the Cebu businessman was indeed the drug lord Peter Lim.

Lim urged the authorities to check his travel records, denying that he had met with Espinosa in Thailand.

“Why not check our travel records, including that of Kerwin, his bodyguard and mine? Very simple. As simple as that. Then they will know that Kerwin is lying,” he said.