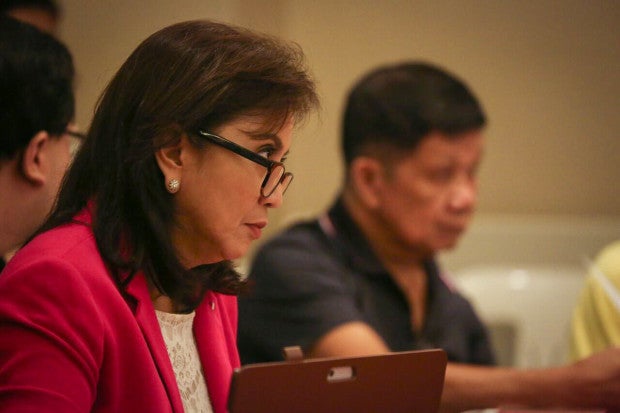 MANILA — Vice President Leni Robredo was eased out of the Cabinet because President Duterte and his allies did not want to give the highest-ranking member of the Liberal Party (LP) access to the administration’s “secret plans.”

Albay Rep. Edcel Lagman, an opposition leader and Robredo’s fellow LP member, surmised that that was the true motive for the move to push the Vice President into quitting her post as housing secretary after she was told by text message to stop attending Cabinet meetings.

Robredo is the interim chair of the LP, the ruling party during the previous Aquino administration, at least until it elects new officers next year. She has been pressed to lead the opposition now that she is out of the President’s Cabinet.

“I think the Vice President was eased out from Cabinet to bar her from access to plans in the Cabinet and national security meetings,” Lagman told a press briefing at the House of Representatives.

He said there were clandestine or secret plans “which should not be known to her as an LP member, which is considered to be not closely allied with the administration despite the fact it’s part of the supermajority.”

The congressman did not give the basis for his speculation, except to say: “That’s why it’s clandestine. I also do not know.”

Lagman, however, agreed that the declaration of Martial Law could be one of those clandestine plans.

“Like what has been said, [this administration] is ‘urong sulong, urong sulong (step forward, step backward).’ Before you know it, it’s there,” he said.

Northern Samar Rep. Raul Daza said Mr. Duterte might also have wanted to make an example of Robredo to warn other members of his Cabinet.

“You will recall just recently that former President [Fidel V.] Ramos commented that the Cabinet is divided. One probable reason the President instigated [Robredo’s resignation]… was to warn other members of his Cabinet to toe the line,” he said.

“It’s not a veiled warning; it’s a naked warning,” he said.

Robredo was one of the few Cabinet members who were vocal in expressing their opposition to some of Mr. Duterte’s decisions and policies, including his assent to the burial of the late dictator Ferdinand Marcos at the Libingan ng mga Bayani.

“It seems there are no democratic values. Like they say, she was pushed because of her views, political or social issues. The President does not want independent thinkers in the Cabinet,” he said.

But he said the main reason was “probably political,” calling it a “segue way to what the Vice President described as a plot to steal the vice presidency.” Defeated vice presidential candidate and former Sen. Ferdinand Marcos Jr. has a pending electoral protest against Robredo.

“While we disagree with President Digong, we are not here to oust him. We are in the same boat… I don’t see why the President should lose trust in Vice President Leni. She is only standing firm on the basic principles she always held dear with her other half,” he said.

Lagman said the President’s treatment of Robredo was an act of “consummate imprudence.”

“The unceremonious manner by which Robredo was eased out from the Cabinet smacks of inordinate partisanship, gross impropriety and absence of requisite politesse,” he said.

Lagman noted that the Vice President was the only incumbent elected member of the President’s official family, “while the rest may even be unelectable.”

“Unlike the other members of the Cabinet, the Vice President is the first in line in the succession for President,” he said.

Lagman added: “As a Cabinet member, the Vice President could not be considered merely as an alter ego of the President because he or she has a distinct and separate popular and constitutional mandate.”  SFM/rga