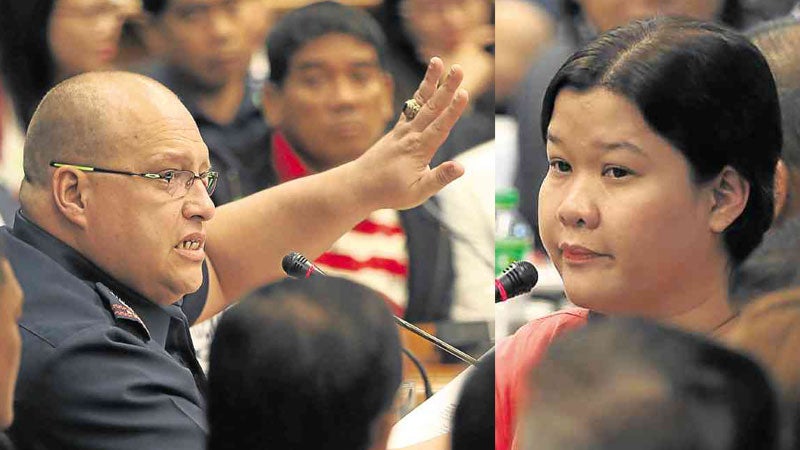 SENATE PROBE Mylene Son (right), widow of Chief Insp. Jesus Son, told senators that he might have been killed for refusing a request made by Chief Supt. Marvin Marcos (left) to have Albuera Mayor Rolando Espinosa Sr. killed. —EDWIN BACASMAS

The widow of Chief Insp. Jesus Son on Monday testified in a Senate hearing that her husband had told her he might be killed for refusing a request made by controversial Chief Supt. Marvin Marcos to have Albuera Mayor Rolando Espinosa Sr. killed.

“(My husband) said I must be ready to take over the responsibilities of the family,” an emotional Mylene Son said in a statement she read before the two Senate committees looking into the Nov. 5 killing of Espinosa in a Leyte jail by a police unit headed by Marcos.

Son was gunned down on Sept. 15 in an ambush that police officials told the Senate committees involved two cars and two motorcycles.

Mylene said her husband was killed one day after he made a post on their joint Facebook account that she stressed was addressed to Marcos, the now relieved head of the Criminal Investigation and Detection Group in Region 8 (Eastern Visayas).

In the Facebook post, which she read during the hearing, the husband accused Marcos of “double cross” and being a traitor.

She explained her husband was angry because he realized a relative’s opinion that Marcos was seeking his help so that he would be the fall guy here.

She had told the Inquirer earlier that her husband had told her Marcos had asked him to find someone for a project, a hit on Mayor Espinosa in exchange for a P500,000 fee.

Sen. Panfilo Lacson, chair of the Senate committee on public order and dangerous drugs, said the testimony of Son’s widow showed there was “a plan to kill Mayor Espinosa,” contrary to the explanation that he resisted the police search on his cell and was gunned down.

Marcos denied he had offered Son P500,000 to kill Espinosa.

He said he learned of Son’s death at a meeting of the Philippine National Police provincial office on Sept. 15 when he heard “a shooting incident in Sta. Fe involving a police officer.”

Marcos recalled that before Son was killed, he attended a gathering where 33 police officers, including Son, were relieved for allegedly being drug protectors.

He said Son had an outburst at that gathering, asking why he was being implicated when there were other big police officers who were receiving payola.

“If you want I will kill Mayor Espinosa,” Marcos quoted Son as saying.

“If there is a motive, I do not have a motive. Those people that were mentioned, maybe Major Son has a motive for killing the mayor,” Marcos said.

Marcos said Espinosa did not name him or his men to be in the payroll of his son, confessed drug distributor Kerwin Espinosa, and it was only Kerwin who named them as being in his payroll.

Marcos also volunteered information that the father of Son, Patrocino, was interviewed by a radio reporter and had said his son had an angry phone conversation with the Albuera police chief, Insp. Jovie Espenido, a day before his killing.

“But I don’t believe Espenido is the one behind (Son’s killing),” he said, adding he had done his own inquiry and had “leads.”

Espenido, who was at the hearing, said that Son texted him on Sept. 13 asking help on other high-ranking police officials who may be protecting drug lords.

Mylene confirmed Marcos’ statement that her husband was among those implicated as protecting drug lords and that he was angry about it.

To reporters after the hearing, Marcos dismissed the allegation of Son’s widow. “Where will I get the P500,000?” he said.

Senior Supt. Franco Simborio, PNP provincial director, said there were witnesses in the ambush-slaying of Son.

“We have a good lead and we are hopeful we can solve this case,” Simborio said. —CHRISTINE O. AVENDAÑO