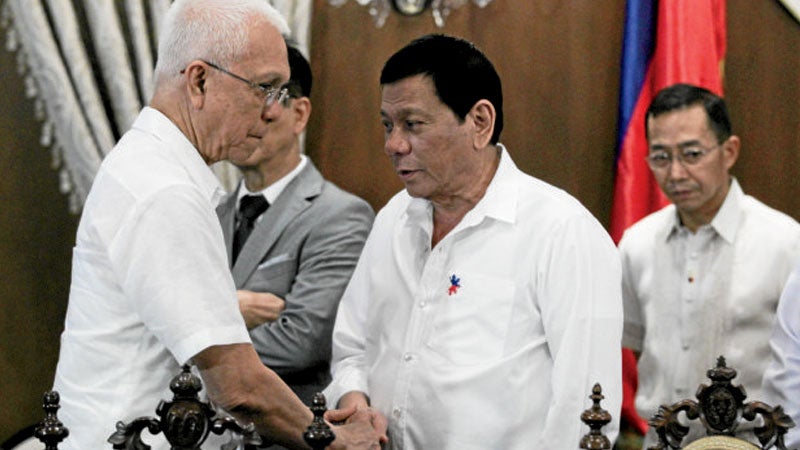 With a “heavy heart,” President Duterte on Monday accepted the resignation of Vice President Leni Robredo as chair of the Housing and Urban Development Coordinating Council (HUDCC), according to Presidential Communications Secretary Martin Andanar.

“It is our duty to defend the dignity and integrity of the Filipino people. If Cabinet members cannot agree with the President’s policy, they are free to resign,” Andanar quoted the President as saying.

Robredo submitted on Monday her formal resignation letter as HUDCC head. Her decision came amid a political storm over Mr. Duterte’s decision to allow the burial of dictator Ferdinand Marcos at Libingan ng mga Bayani and a bloody crackdown on illegal drugs that has alarmed Western governments and human rights watchdogs.

The Vice President cited her opposition to the Marcos burial, the drug killings, the President’s plan to reimpose the death penalty, and “sexual attacks against women” among the issues she differed with Mr. Duterte.

The last straw, Robredo said, was when she was notified on Sunday by Evasco, through a text message, about the President’s order for her “to desist from attending all Cabinet meetings” starting yesterday.

Evasco said the President decided to bar her from the meetings because of her “irreconcilable differences” with the administration.

He pointed out that it was the President’s prerogative to choose members of his Cabinet and the authority “to withdraw the same for reasons known only to him.”

As members of his official family, Evasco said, Cabinet members understood they should toe the line and support the President’s programs, platforms and policies.

“It is important that while one is a member of the Cabinet to express one’s views discreetly and not be adversarial publicly,” he said.

She did not provide details about the alleged plot to remove her from the vice presidency, but her electoral victory has been questioned by her closest rival in the race, former Sen. Ferdinand “Bongbong” Marcos Jr., the son of the late strongman.

Robredo said she had chosen to ignore warnings “of a plot to steal the vice presidency” and instead tried to focus on her work.

“But the events of recent days indicate that this plot is now being set into motion,” she said.

LP out of supermajority

Speaker Pantaleon Alvarez denied on Monday that the Duterte administration was starting to push Robredo out of her seat as her resignation from the Cabinet sparked a call for the Liberal Party to break away from the House’s supermajority.

“With the huge problems our country faces, is the President really going to exert effort on that?” he said.

But Alvarez praised Robredo because she resigned on her own. He said it would be “too awkward” if Robredo, as an alter ego of the President, would voice out her opposition “every time the President says something.”

He also said Mr. Duterte was being courteous enough. “If you no longer trust your girlfriend, break up with her. Why put it up with her?” he said.

“If he were male, I think the President would actually kick him out. But of course, she’s a woman and the President was just being courteous,” he added.

Andanar said he was clueless about the decision of Mr. Duterte to exclude Robredo from the Cabinet meetings. He said he did not expect her to leave the administration as housing czar this soon.

“It’s sad that it had to end this way,” he told the Inquirer in a chance interview in Malacañang.

Fr. Jerome Secillano, executive secretary of the Permanent Committee on Public Affairs of the Catholic Bishops’ Conference of the Philippines, said resigning was the best thing for Robredo to do “if she feels unwanted in the Cabinet.”

“Better for her to just concentrate on helping the poor using her position as Vice President,” Secillano said. —WITH REPORTS FROM VINCE F. NONATO, JULIE M. AURELIO AND AP