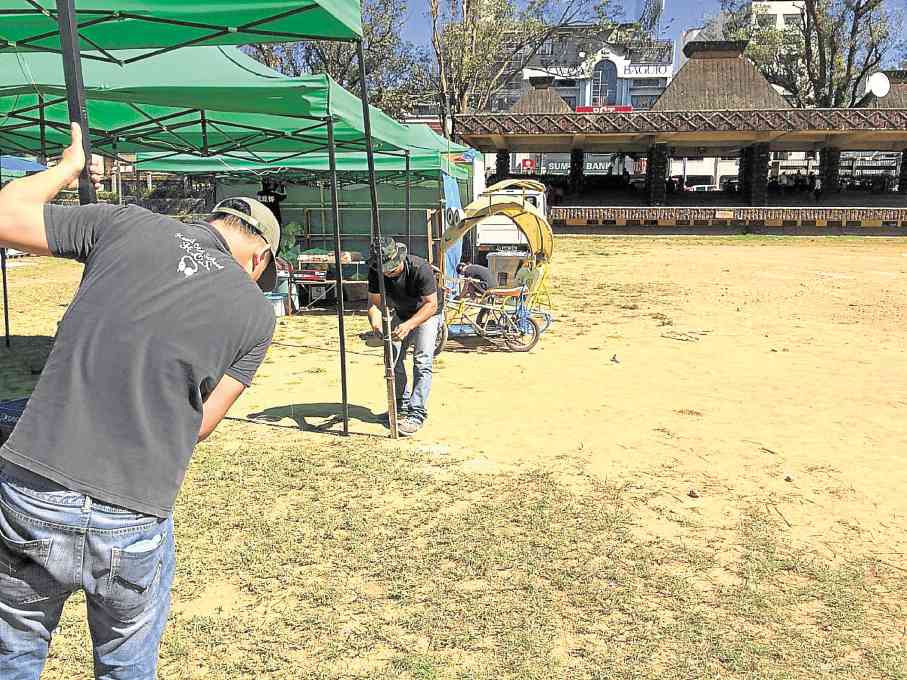 Workers set up tents for a Christmas bazaar to raise funds for a Miss Universe event in Burnham Park but Baguio City traders are up in arms, protesting what they said was unfair competition that the bazaar is giving them. —VINCENT CABREZA

BAGUIO CITY—A plan to raise P40 million in funds to host Miss Universe contestants here next month, without using government money, is pitting organizers of the event at the summer capital against local traders.

The city government allowed the Hotel and Restaurant Association of Baguio (HRAB) to sponsor the contestants’ tour and set up a Christmas bazaar at Burnham Park to raise the funds.

But the plan ran into opposition from local traders, like Ellen Lao, who accused the HRAB of raising funds for the Miss Universe event “at the expense of Baguio traders.”

Lao petitioned for and was granted a seven-day temporary restraining order (TRO) by a Baguio court against the bazaar, which stopped at least 80 stalls from selling food, souvenirs and clothing at Burnham Park starting Dec. 1.

The TRO was issued on Nov. 29 by Judge Maria Ligaya Itliong-Rivera of the Regional Trial Court Branch 5.

Baguio was selected as one of the cities to be visited by Miss Universe contestants, following extensive lobbying from the business sector, notably HRAB.

Reigning Miss Universe Pia Wurtzbach and 20 pageant contestants are scheduled to be in Baguio and visit the presidential Mansion and the Philippine Military Academy on Jan. 18.

HRAB and members of the city government said the tour would give Baguio a shot at international fame because segments of the visit and tour would be videotaped and shown at the Miss Universe pageant night at the Mall of Asia Arena on Jan. 30.

The tour, however, requires HRAB to pay a P25-million fee to the Miss Universe Organization. HRAB had advanced P7 million, and was required to pay the balance in installments.

HRAB also needed to raise more than P15 million for the contestants’ lodging, food and travel, as well as pay government fees and taxes.

HRAB counsel Renato Rondez said the businessmen had offered to put up a bond to pay for any damage to Burnham Park in the course of operating the bazaar there.

Losing the tour would mean an embarrassment for the city, he said, without elaborating.

But lawyer Marissa Madrid-Dacayanan, Lao’s counsel, questioned HRAB for pursuing the Miss Universe tour without logistical support, during a hearing on Friday set by Judge Rivera to hear arguments concerning the bazaar.

Dacayanan said: “[Are officials of HRAB] saying that if they do not proceed with this trade fair they wouldn’t have any money to fund [this segment of] Miss Universe which they requested in the first place? Then it is HRAB’s [burden], not the city, and definitely not the citizens of Baguio.”

Some Baguio residents have also objected to the bazaar. A senior citizen said P35 million should be used instead to hire more street sweepers to clean the heavily populated Baguio.

Dacayanan also cited a provision of an executive order, issued in 2008 by former President Gloria Macapagal-Arroyo.