No room for Virgin Mary in French public park 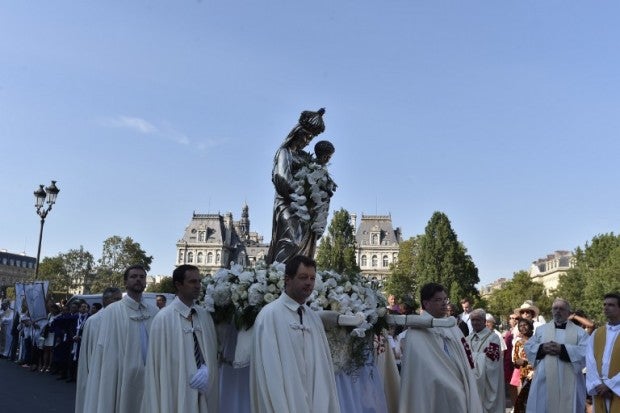 Religious people carry a statue of the Virgin Mary as they march during a Catholic procession as part of the Feast of the Assumption, in Paris, on August 15, 2016. In the village of Publier in the Haute-Savoie region of France, authorities have ordered local leaders to remove a statue of the Virgin Mary from a public park to conform with a national ban on religious symbols in public. AFP

GRENOBLE, France — A town in eastern France has been ordered to remove a statue of the Virgin Mary to comply with a national ban on religious symbols in public, the local mayor said Saturday.

An administrative court ordered the commune of Publier, in the Haute-Savoie region to remove the religious image which has stood in a public park since 2011.

The town has three months to comply with the judgment before it starts incurring a fine of 100 euros per day, according to the November 24 judgment.

Town mayor Gaston Lacroix said he intended to find a new home for the offending statue “on private land”.

The image of the mother of Jesus has been a subject of controversy since it was installed without any debate in the municipal council, but using municipal funding.

The statue was subsequently sold to a religious cultural association which was not, however, allowed to buy the parcel of land it stood on, meaning it remained on public property and therefore in breach of French rules regarding religious symbols.

One of the world’s most secular countries, France strongly separates religion and public life.

In 2010, France became the first country in Europe to ban the full Muslim veil in public spaces.

Several southern French beach towns near Nice banned the burkini beachwear over the summer, but those restrictions were struck down by the courts. CBB/rga