Bato: We have no plan to declare martial law | Inquirer News

Bato: We have no plan to declare martial law 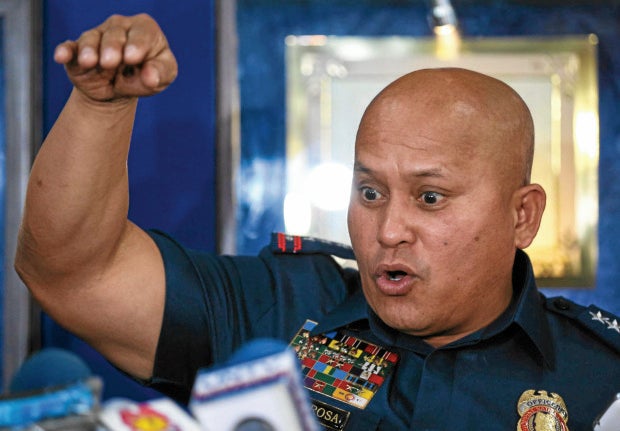 “We have no plans to declare martial law.  The President has not said anything about declaring martial law.  That’s so farfetched,” Dela Rosa said, in an interview with the media on Friday, at the sidelines of a deployment of a new battalion of police-guards at the New Bilibid Prison.

In a surprising move, Dela Rosa  narrated his own experiences of abuse when martial law was declared by the late dictator Ferdinand Marcos.

“My father was beaten up by the Philippine Constabulary (PC). He was forced-fed grilled bangus with the hot charcoal still sticking to the fish. They opened my father’s mouth, stuffed it with bangus. My father’s face swelled. That’s martial law for me,” the PNP chief said.

Dela Rosa also said the PC  had also rounded him up once for staying out past curfew.

“We had no ride home, so we walked back to our barangay. The PC nabbed us and herded us onto six by six  [trucks]. They brought us to the PC barracks and had us line up. They had us carry machine guns  and told us to pray because we would get the firing squad because of the curfew,” he said.

“They didn’t kill us, just frightened us. That’s martial law for me. So do you think I would advice that?” Dela Rosa asked.

“If you went through something like that, you don’t want that to happen again. But in case [martial law is declared], it really depends on who implements it,” Dela Rosa said.

“If the President will really order martial law, and I would be the one to implement it, I would know how to implement it without violating human rights, because I, myself, was a victim,” the PNP chief said.