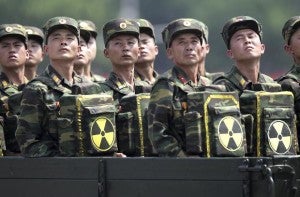 In this file photo (taken on July 27, 2013), North Korean soldiers turn and look towards their leader Kim Jong Un from a military parade vehicle as they carry packs marked with the nuclear symbol during a ceremony marking the 60th anniversary of the Korean War armistice in Pyongyang, North Korea. On Friday, Dec. 2, 2016, North Korea says a sweeping new round of UN sanctions aimed at choking its nuclear program by cutting off as much of a quarter of its foreign trade revenue is an “abuse of power” and will be met with tough countermeasures. Photo by WONG MAYE-E/AP

WASHINGTON — Responding to North Korea’s recent nuclear test and alleged violations of UN resolutions, the US is issuing new sanctions to cut off money to the country and counter what the Treasury Department calls continued “provocative behavior” by Pyongyang.

The US sanctions imposed Friday follow a sweeping new round of UN sanctions aimed at choking North Korea’s nuclear program by cutting off foreign trade revenue. Pyongyang calls the UN action, the harshest to date, an “abuse of power” and says it will be met with tough countermeasures.

The US action designates 16 entities and seven individuals for their suspected ties to the North Korean government or its nuclear and weapons proliferation effort. The action freezes assets they have in US jurisdiction and bans Americans from doing business with them.