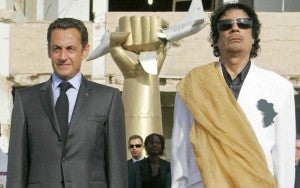 This file photo (taken on July 25, 2007) shows Libyan leader Moammar Gadhafi, right, and French President Nicolas Sarkozy standing while national anthems are being played, at the Bab Azizia Palace in Tripoli, Libya. Competing militias have chopped Tripoli up into fiefdoms and power centers after longtime dictator Gadhafi, Libya’s ruler for 42 years, was ousted and killed in an uprising in 2011. –Photo by MICHEL EULER/AP

BENGHAZI, Libya — Clashes continued for the second day among heavily-armed militias in the Libyan capital Tripoli, vying for power and control over the city, with one dislodging another in at least two posts, a five-star hotel and a barracks, in what appears to be the worst outbreak of violence the city has seen in two years.

Competing militias have chopped Tripoli up into fiefdoms and power centers after longtime dictator Moammar Gadhafi, Libya’s ruler for 42 years, was ousted and killed in an uprising in 2011. They maintain what observers describe as a “balance of terror.”

Witnesses in Tripoli said Friday that gun battles rocked the southeastern Nasr Forest district and adjacent neighborhoods as residents were advised by a local emergency body affiliated with the Interior Ministry to remain home and away from windows.

The clashes started Thursday and have reportedly killed at least eight, according to state news agency LANA. During a lull in the violence late Thursday night, panicked residents could be seen lining up outside gas stations to stock up on fuel.

In a statement Friday, UN Envoy to Libya Martin Kobler called for halt to the fighting, saying he is “extremely alarmed.”

“It’s completely unacceptable for armed groups to fight to assert their interest and control, particularly in residential areas, terrorizing the population,” he said.

Reached by phone, a female resident in Tripoli told The Associated Press that families had locked themselves in their homes.

“We haven’t slept all night and we haven’t left the house since yesterday. All we are hearing is screaming, bombings and gunfire,” she said, “the security situation is going from bad to worse.”

“We just want the militias to leave,” she pleaded.

The UN-brokered unity government has not commented ongoing fighting and, given the fluidity of the situation, it remains to be seen whether the victors of the clashes will back the internationally-recognized body.

“This is a struggle over power. Each of the warring parties has its political and ideological agendas,” said Sami al-Atrash, a Tripoli resident and a legal expert. “The clashes are belated. They expected at any moment and finally happened.”

In March of this year, the prime minister of the unity government, Fayez Sarraj, arrived quietly by boat to Tripoli from Tunisia. Militias in control of the capital showed no resistance.

One of Tripoli’s warring sides is supportive of Sarraj and comprised of mainly local militias, such as the ultraconservative Salafist forces led Abdel-Raouf Kara, known as the Special Deterrent Force, or “Rada” in Arabic. One of Tripoli’s largest and most powerful militias, Tripoli Revolutionaries, led by Haytham al-Tajouri, had previously been ambivalent about the unity government, but it has now joined forces with the Rada militia.

The other warring group is more skeptical of the unity government. Some hail from the western city of Misrata, while others are linked to the former leader of the onetime Jihadist but now defunct Libya Islamic Fighting Group by Abdel-Hakim Belhaj. They are backed by the hard-line Grand Mufti Sadek al-Ghariani. Both of Belhaj and the Grand Mufti are believed to be receiving financing from Qatar.

The two sides have been exchanging accusations of orchestrating killings and kidnappings. The latest dispute involved an aide to al-Ghariyani, Nader al-Omrani, whose body was found weeks after he was abducted, and the Rada militia was blamed for his killing.

On Thursday night, the Rada and Tripoli Revolutionaries militias took control of five-star hotel Al Mahary Radisson Blu Hotel in central Tripoli, where Belhaj had turned some of its rooms into offices. The same alliance also took over the 6th Division barracks once occupied by rival militias.

Fighting also broke out in the vicinity of the Rixos hotel, to the capital’s southeast — its convention center was once the meeting venue for the outgoing parliament but has since changed hands.

The fighting is believed to be the worst in two years, following Libya’s last parliamentary elections when Islamists were dealt an unexpected blow, and the anti-Islamist head of the armed forces general Khalifa Hifter launched an offensive against Islamic militants in the eastern city of Benghazi.

Friday’s fighting came amid unconfirmed reports that the UN would make substantial amendments to the current political agreement to give Hifter a share of power, which could anger his rivals in Tripoli and Misrata.

As the fighting in Tripoli rages on, Sarraj’s government may be pleased to see one of its rivals — the militias linked to Belhaj and the Grand Mufti — crushed, but given a climate of regularly shifting alliances, it’s still unclear whether the battles will serves the interest of the UN-backed unity government.

Meeting with his Italian counterpart in Rome, US Secretary of State John Kerry blamed the violence on Hifter and others refusing to join the unity government, saying that the ongoing violence was “only empowering extremists.”

“Our tool is diplomacy,” Kerry hastened to add, explaining that no military action by the US or Western countries was being considered to stabilize Libya.

The last large-scale escalation of clashes in Tripoli occurred in 2014 when a coalition of Islamist militias known as Libya Dawn seized Tripoli International Airport, unseated the interim government and forced it to flee to the eastern city of Tobruk, where Libya’s last elected parliament convened. The violence forced the closure of foreign embassies, displaced hundreds of thousands of residents, and left the capital with no airport except for the Mitiga air-base under the control of Belhaj.

In 2015, the UN brokered a peace deal among warring parties, under which a new Presidency Council and power-sharing government sought to heal the country’s rift and lead it to new elections. The head of the Presidency Council and designated-prime minister, Sarraj, however, has failed to achieve this goal after the internationally-recognized parliament —seated in Tobruk — refused to give a vote of confidence to Sarraj’s government.

The parliament objected to a key article which gives Sarraj’s institutions power over the army. Hifter — who is backed by Egypt and UAE — opposed the deal and has lately achieved some military victories over Benghazi’s militants, who were supported by some of Tripoli Islamists, and moved his forces to free Libya’s oil terminals, the country’s main revenue source, from eastern militia commander Ibrahim Jedran.

Meanwhile, in Sirte, the birthplace of Gadhafi, forces loyal to the UN-recognized government are battling Islamic State militants with the support of US air cover.

A separate conflict has been blazing for two years in the eastern city of Benghazi, where Hifter is leading a battle against Islamic militants and the al-Qaida-linked group of Ansar al-Shariah.

As peace efforts stall, the lingering political and security vacuum has turned the once rich country into a proxy war battleground where Egypt and the United Arab Emirates support anti-Islamic forces, while Qatar and Turkey back various Islamist groups. –Rami Musa/AP