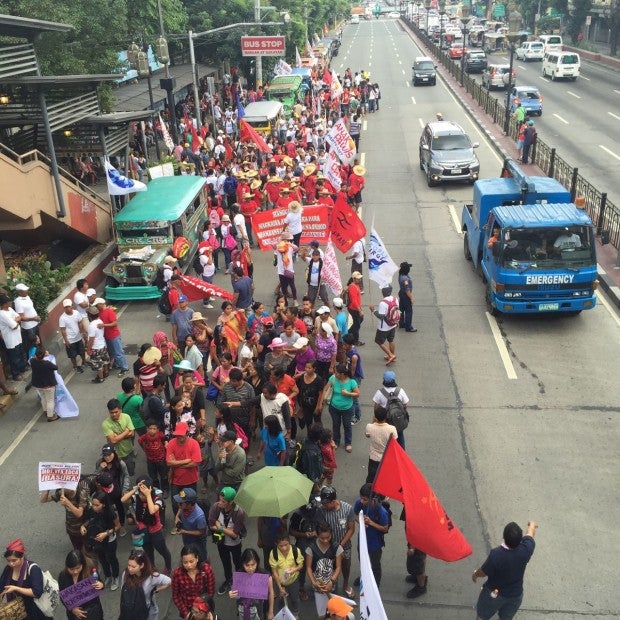 Kilusang Mayo Uno members march on Nov. 30, 2016, National Heroes’ Day, to Mendiola, to demand for an end to contractual jobs, push for higher wages and protest the burial of dictator Ferdinand Marcos at the Libingan ng mga Bayani. (PHOTO BY JOAN BONDOC/ INQUIRER)

This was the advice given by the head of a militant labor group to President Rodrigo Duterte, who has been under fire from some sectors after he allowed the burial of Ferdinand Marcos at Libingan ng mga Bayani.

“Instead of … boasting about Marcos, his examples should be Bonifacio and Commandant Castro in the fight against imperialism, feudalism and bureaucrat capitalism,” Elmer Labog, chairman of the Kilusang Mayo Uno, told protesters in a rally in Mendiola on Wednesday.

The rally — attended by thousands of members of militant groups who denounced Marcos’ burial at the Taguig cemetery, called for an end to job contractualization, and pushed for higher wages –coincided with the 153rd birth anniversary of Andres Bonifacio, the Filipino revolutionary leader and father of the Katipunan.

It was also held five days after the death of Castro, Cuba’s former leader who led the South American country’s communist revolution in the 1950s, and is regarded by some as a revolutionary hero, but by others as a ruthless dictator who banned free speech, and executed or jailed thousands of his political opponents.

According to Labog, there is “inspiration” to be gotten from the life of Bonifacio, who fought against the “colonial Spaniards” to push for “national democracy.”

“In his fight, there were traitors and lapdogs of imperialism like (Emilio) Aguinaldo. It’s important to learn those lessons,” he said.

As for Castro, he said the “revolutionary leader of the entire world” stood up to “American imperialists,” and even led the fight in the Bay of Pigs invasion in 1961 against 1,400 “mercenaries” who were “American lapdogs” sent by the United States of America to topple his communist government.

He said the Cubans defeated the mercenaries, but instead of “burying” them in the South American country, Castro sent them back to Miami in exchange for food and medicine.