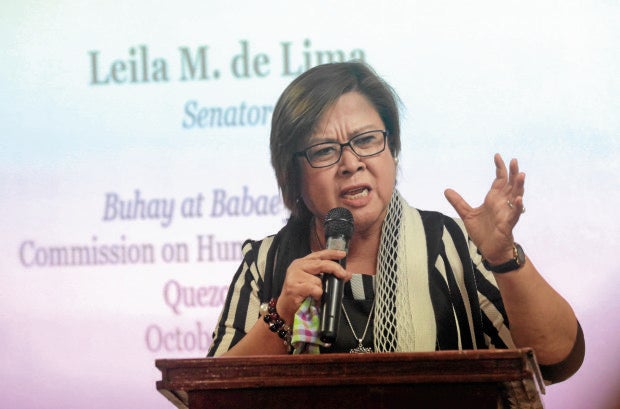 It was the President’s trusted man, Christopher “Bong” Go, who allegedly called and asked the head of the Philippine National Police, to reinstate a cop involved in the killing of Albuera, Leyte Mayor Rolando Espinosa Sr.

Senator Leila de Lima, citing sources, identified Go as the one who made a call to PNP chief Director General Ronald “Bato” Dela Rosa and asked to reinstate Supt. Marvin Marcos and his group to the Criminal Investigation and Detection Group (CIDG) Region 8.

“I have an idea who he is. Ma-libel kaya ako (Would I be charged with libel)? I know. I’ve my own sources,” De Lima said in a press briefing on Thursday in her office in the Senate.

“Bong Go. Let them deny that. If they deny, okay hindi naman ako ang source (that would be okay because I’m not the source). I’m just quoting a source,” said De Lima, a former Justice Secretary.

“That’s an open secret among PNP officials na (that) it was Bong Go. Hindi lang si Bato ang nakakaalam nyan (Bato is not the only one who knows it)…” De Lima added.

The senator said some police officials felt that the hierarchy was bypassed when Marcos was reinstated in his post without asking their opinion.

“Even yung (the) CIDG head, I think, never knew about it,” said De Lima.

The PNP chief, she said, could be held liable for reinstating Marcos, who had been relieved from his post pending investigation for alleged illegal acts.

“Kasi kaya inalis, ni-relieved dahil may kasalanan under investigation…But tinawagan sya (Dela Rosa) ng malakas na tao, tao ni Digong ni-reinstate. O may liability sya dyan, sya si General Dela Rosa (He was relieved because of a wrongdoing and he’s under investigation. But Dela Rosa received a call from a higher-up, Duterte’s man, to reinstate [Marcos and his men]. He could be held liable for that),” she said.

De Lima said Dela Rosa could be held liable for abuse of authority and conduct prejudicial to the interest of service.

“Dahil diniktahan, hindi nya pwedeng tanggihan? Nagkakaroon naman sya ng (Just because he was dictated, he couldn’t refuse it? He had a) legitimate valid reason to decline under investigation e,” she said.

She surmised that Go would not make the call to the PNP chief without an instruction from a higher-up.

De Lima, who has been accused of involvement in the illegal drug trade, assured that she was not just making up stories. RAM/rga