Ateneo, UP, DLSU set aside basketball rivalry to unite vs Marcos 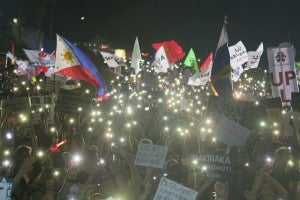 University students and activists from different generations converge at the People Power monument along Edsa, on Nov. 30, 2016, to sing the same hits even as they protest the burial of dictator Ferdinand Marcos at the Libingan ng mga Bayani. (PHOTO BY JILSON SECKLER TIU/ INQUIRER)

Students of the Ateneo de Manila University, the University of the Philippines and De La Salle University set aside their rivalry in college basketball on Wednesday to unite against the sneaky burial of late dictator Ferdinand Marcos at the Libingan ng mga Bayani.

One by one, leaders of the so-called “Big Four” schools, except the University of Santo Tomas, spoke before thousands of anti-Marcos protesters, majority of whom were millennials, at the People Power Monument in Quezon City.

Before giving a message, Ateneo President Fr. Jett Villarin, S.J., sang the Ateneo chant “One Big Fight!” along with the crowd.

UP students and alumni in the rally also chanted “Unibersidad ng Pilipinas!” when Chancellor Michael Tan took the stage.

The chancellor thanked the students for attending the rally while the Ateneo Blue Eagles and the FEU Tamaraws are competing in a UAAP basketball match.

(“It’s rare for the the three schools – Ateneo, La Salle, and UP – to get together. So I thank you for coming here, knowing that there’s a game now. But we have to put aside UAAP and basketball because our event this afternoon is more important.”)

Tan said that, although he did not fully support the exhumation of Marcos’s remains at the Libingan ng mga Bayani, he encouraged UP members to “dig the truth up.”

(“You should dig up the truth. It’s you who will write it.”)

“The millennials will write the history and it would be a history that would include this afternoon’s event,” he added.

De La Salle Philippines President Bro. Jose Mari Jimenez, meanwhile, criticized the “Change is Coming” campaign slogan of President Rodrigo Duterte, saying change for the entire nation should not depend on the decision of one person only.

(“We were told then that ‘Change is coming.’ If it’s true that change is coming, then true change will not come from just one person.”) /atm

Read Next
Not 300, but 5,000 trees to be cut for road
EDITORS' PICK
La Filipina empowers Filipino sports teams to sprint towards athletic dreams
First antiviral drug approved to fight COVID-19
China sees rise in new virus cases, death toll rises to 1,770
SMDC brings premier bayside living to Bacolod
OFWs stuck in PH want HK ban lifted, eager to return to jobs
Check out these 5 ways women can sleep better and have #WalangWorry Nights!
MOST READ
Alden on what it’s like to work with his idol Bea
TNT gets Poy Erram in 3-team deal
Duterte vs America
Researchers find fewer pangolins in Palawan forests
Don't miss out on the latest news and information.