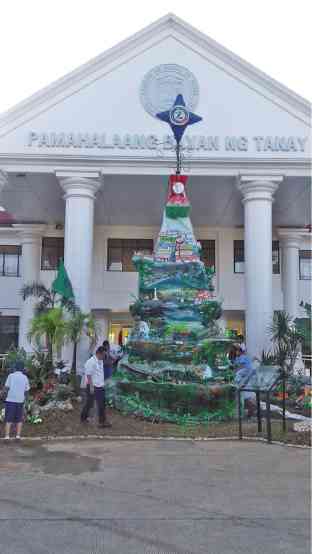 A 7.6-meter tall Christmas tree made of recycled materials is on display at the Tanay town hall. CONTRIBUTED PHOTO

Plastic bottles, used cardboard and scrap from local junk shops end up as Christmas trees put on display in every town government compound in Rizal province.

In Tanay town, for instance, a 7.6-meter (25-foot) high tree made from recyclable materials collected and donated by more than 100 residents, was lit last week, said Carlos Inofre Jr., the town’s environment officer.

“Truckloads of trash were brought in. It took us over a month to finish the tree,” Inofre said.

Gov. Rebecca Yñares had required Rizal’s 13 towns and one city to put up a Christmas tree made from recycled materials.

She said local governments have been undertaking the project since 2013, but only government employees were taking part in the activity.

“Now, even school children with their parents and [local prisoners] helped make the decors. Even the mayors themselves supervised [the activity],” Yñares said in a telephone interview.

The activity was part of a provincial government environmental project, launched in 2012, that included forest rehabilitation and solid waste management.

“We incorporated Tanay’s history since the 1500s. Like pictures of the town’s first church or how the old municipal building looked like,” he said.

He said they wanted the tree to become not only the town’s central holiday attraction, but a tool to educate locals and visitors alike.

Over the past years, Tanay implemented its own programs on waste management, like giving away school supplies, soil fertilizers and detergent to households that segregate their wastes.

“We’re glad that people seem to have internalized our projects already when they volunteered to help make the Christmas tree,” he said.

The local government with the best looking Christmas tree, Yñares said, would be given a fitting prize—garbage trucks.

Inofre said the campaign on proper waste disposal has translated to savings for the Tanay government.

He said the town spends only P1 million annually for garbage collection and disposal to landfills, lower than the expenses of nearby cities which shell out as much as P50 to P80 million.

When the holiday’s over, where does the tree end up then?

“Well, we can use them for festivals next year and the following Chirstmas season. In Tanay, walang sayang (nothing is wasted),” Inofre said.