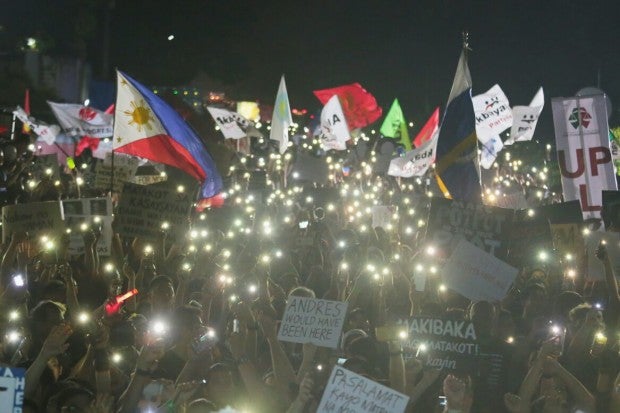 University students and activists from different generations converge at the People Power monument along Edsa, on Nov. 30, 2016, to sing the same hits even as they protest the burial of dictator Ferdinand Marcos at the Libingan ng mga Bayani. (PHOTO BY JILSON SECKLER TIU/ INQUIRER)

MANILA — Artists expressed their solidarity with the protest at the People Power Monument against the hurried burial given to late dictator Ferdinand Marcos at Libingan ng mga Bayani.

Millennials and baby boomers cheered and nodded their heads to hits of the old and the new.

Rock band Moonstar88 led the crowd in denouncing Marcos as a hero.

“Bes, hindi tayo mag-momove on (Best friend, we will not move on),” their vocalist said. “Ayaw natin sa magnanakaw!” (We reject the thief.)

Jim Paredes of Apo Hiking Society sang “Batang-Bata Ka Pa,” (You’re Still So Young) bridging the generational gap, much to the delight of those from his generation.

Visual artist Toym Imao took to the stage a life-size version of the Laser Sword, the famous weapon from ’70s anime, Voltes V.

Imao recalled how the martial law regime pulled the plug on and censored the anime series, allegedly due to “excessive violence.”

He later took out a light saber, drawing more cheers from the younger crowd.

“This is a long fight,” Imao said, as he told the crowd to raise their smart phones, which he dubbed the “lightsaber in their pockets.”