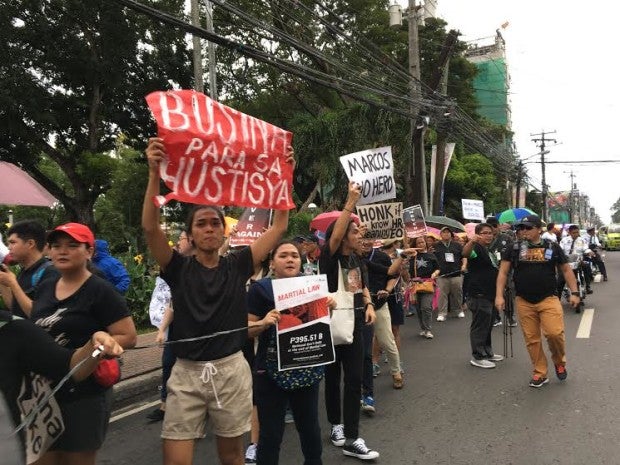 It has been more than 33 years since her husband John was gunned down by state agents on March 29, 1983 but the pain lingers.

Their two children were aged five years old and five months when her husband, an activist fighting the Marcos Dictatorship, was killed.

“Until now, there is no justice,” Josefina said.

She said the burial of former president Ferdinand Marcos at the Libingan nga mga Bayani has opened wounds and brought back the pain.

“I came here to show support (for the protests against the Marcos burial at the heroes’ cemetery),” she told the Philippine Daily Inquirer

Many others also came in black shirts including lawyers, doctors, teachers, students and other professionals.

“We gathered here on Bonifacio Day to remember the real heroes.  There are many heroes who were not buried in the heroes’ cemetery and many who have disappeared and have not been found,” said physician Kristin Treñas.

“It is important to be vigilant and to never forget the past,” she said.

The Mass was held in remembrance of Martial Law victims and Fr. Rudy Romano, a Redemptorist priest who was abducted by armed men on July 11, 1985, in Barangay Tisa in Cebu City.

Then the vice president for the Visayas of the militant Bagong Alyansang Makabayan (Bayan), Romano was among the most vocal against the dictatorship. He has not been found and presumed dead.

Fr. Frank Tobin, a contemporary of Romano in the priesthood who celebrated the Mass with two other priests, said Filipinos must constantly remember those who “stood for life and for life” and those “who suffered for their faith.”

He said this has become more significant in the light of “recent events,” apparently alluding to the burial of Marcos at the heroes’ cemetery.

In Bacolod City, some 750 Negrenses joined three separate protest actions against the Marcos burial at the Libingan ng mga Bayani.

“Negros will not forget” was the message of about 300 millenials from the University of St. La Salle and St. Joseph School who held a boisterous noise barrage along Lacson Street.

They were joined by protesters beating drums, blowing whistles amid cheers and honking from passing vehicles.

Brother Manuel Pajarillo, USLS president, said they were protesting Marcos’ burial at the Libingan ng mga Bayani because Marcos was not a hero. He said the protest was also in behalf of those who died, were tortured and illegally detained during the Marcos dictatorship.

At the Bacolod Fountain of Justice, 50 Bayan-led protestors aired their opposition to the Marcos burial.

About 400 Partido ng Manggagawa members gathered at the Bacolod Welcome Rotonda to demand a ban on contractualization and protest the hero’s burial of Marcos. They called their protest “National Day of action against Endo.”

In a separate rally at the Bacolod City public plaza, around 3,000 joined the Kilusang Pagbabago gathering with National Youth Commission chair and celebrity Aiza Seguera where they aired support for President Duterte’s fight against illegal drugs.

Groups led by the Bayan held a candle-lighting protest in front of the Iloilo provincial capitol that was joined by around 100 protesters.

A march rally and noise barrage led by Bayan was also held at the Roxas City plaza. Around 400 protesters lit candles.

In the capital town of Kalibo in Aklan, about 300 protesters converged at the Datu Bangkaya marker where a program and candle-lighting activity was held.  SFM