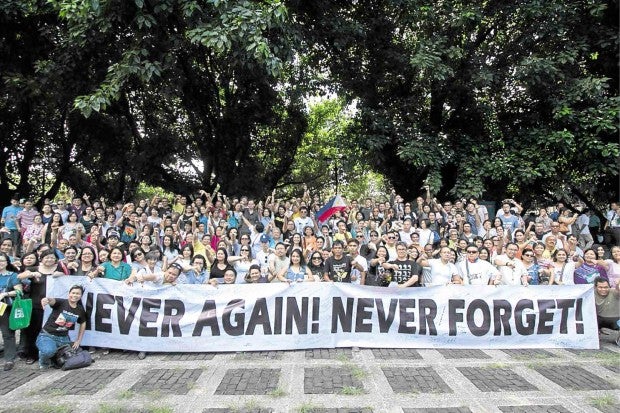 FREEDOM lovers gather at the Bantayog ng mga Bayani—a memorial center built to honor the victims of martial law—to share their experiences under the Marcos dictatorship and make their opposition known to President-elect Rodrigo Duterte’s plan to bury him at the Libingan ng mga Bayani. ALEXIS CORPUZ

The 19 were hailed as the nation’s “real heroes” for resisting repression during martial rule.

The rites were among key events held in commemoration of National Heroes’ Day, marked by protest actions in various parts of the country amid a groundswell of indignation against Ferdinand Marcos’ Nov. 18 burial at the Libingan ng mga Bayani.

“The message we want to convey is that we need to spread the truth about history, because if not, this will keep on happening. We saw what happened this month, the one who had committed a sin against our nation was buried at the Libingan ng mga Bayani,” said former Sen. Wigberto Tañada, who heads the Bantayog ng mga Bayani Foundation.

“We are honoring these people today, the 19 real heroes, because of the important role they played, the help they gave to topple the dictatorship. We hope this shows the youth, the millennials we call today, that we should not disregard their heroism,” he said in an interview before rites began at 4 p.m. 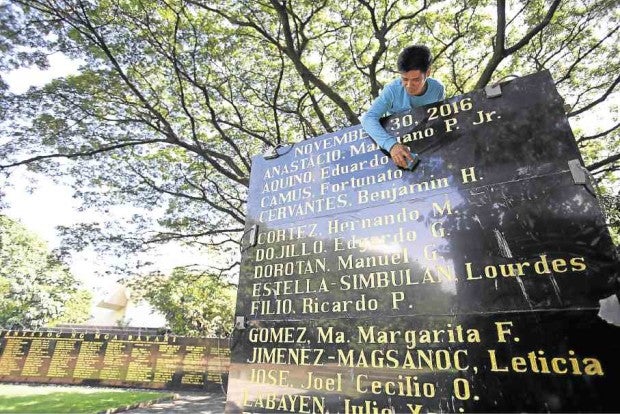 REAL HEROES The names of 19 people who fought the Marcos dictatorship have been engraved on the Wall of Remembrance at Bantayog ng mga Bayani in Quezon City. They will be honored in solemn ceremonies tomorrow, Bonifacio Day. The names include those of the late Inquirer editor in chief Letty Jimenez-Magsanoc and former Sen. Jovito Salonga. —NIÑO JESUS ORBETA

In his opening remarks, he emphasized: “Marcos is no hero. He does not deserve to be buried at the Libingan ng mga Bayani.”

President Duterte had allowed Marcos’ burial at the LNMB, a decision affirmed by the Supreme Court.

Former Senator Rene Saguisag, who came to remember the heroism of his late uncle and colleague, former Sen. Jovito Salonga, cited the urgency of remembering in the wake of Marcos’ secrecy-shrouded burial.

“To me, this gives greater importance to remembering the real heroes who are here. What I fear is if someone suggests to list Marcos (on the Wall of Remembrance), the Supreme Court will again say there is no law against it. Don’t we have common sense anymore?,” he said.