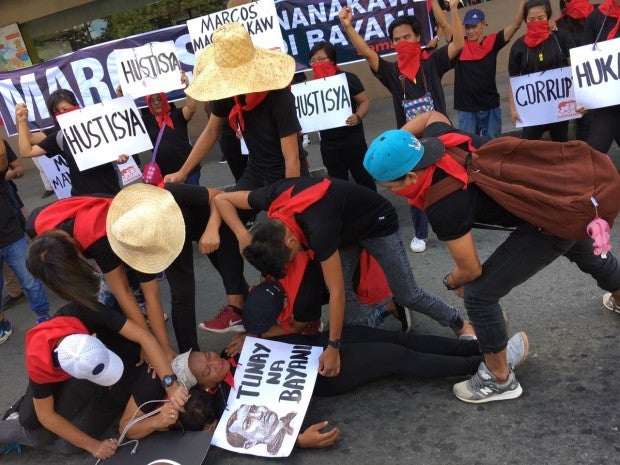 Members of the UP Samasa Alumni and Volunteers Coalition Against Marcos Burial in Libingan ng mga Bayani do the mannequin challenge in Quezon City to drum up support for their cause. CONTRIBUTED PHOTO

To drum up their protest against the burial of the late president Ferdinand Marcos at the Libangan ng mga Bayani, around 80 members of the UP Samasa Alumni and Volunteers Coalition Against Marcos Burial in Libingan ng mga Bayani trouped to five protest sites in Quezon City early Wednesday morning.

The group onboard four vehicles started the protest around 9 a.m. from the Quirino Avenue corner Mindanao avenue, to Balintawak, and then to Boy Scout’s Circle before they headed to Philcoa in front of a fast-food chain, and then to MRT- Cubao around 12 p.m.

The group, which started with around 20 protesters and grew to 80, voiced out their indignation through the playing of “Handog Ng Pilipino Sa Mundo,” the theme song of People Power revolution, dance mobs and a mannequin challenge in every protest area, said Bobby Diciembre, a member of the coalition.

In black shirts, they held placards detesting Duterte’s move to bury Marcos as “a favor that burden the Filipino citizens.”

The UP Samasa, in its statement, said the burial of Marcos at the Hero’s cemetery is a sheer violation of the spirit of democracy and will of the Filipinos.

“The Supreme Court’s decision is an utter disregard of all the lives offered by our martyrs, students, teachers, professionals and workers for democracy,” it added.

The group is calling on all sectors of society to join and support today’s protest and unite in showing that “Marcos is not a hero and never will he be,” Diciembre said.

“We are not doing this for any party or group. This is our fight against the Marcos family and their move to change the truth and regain power…and any action to revive  martial law,” the group added in its statement.

The group, without alluding to any president, also said it condemns all forms of violence and killings, and leaders that support it.

“All killers should not be given the right to lead the government,” it added.

The protest will culminate at the People’s Power Monument on Edsa starting at 4 p.m. Wednesday. 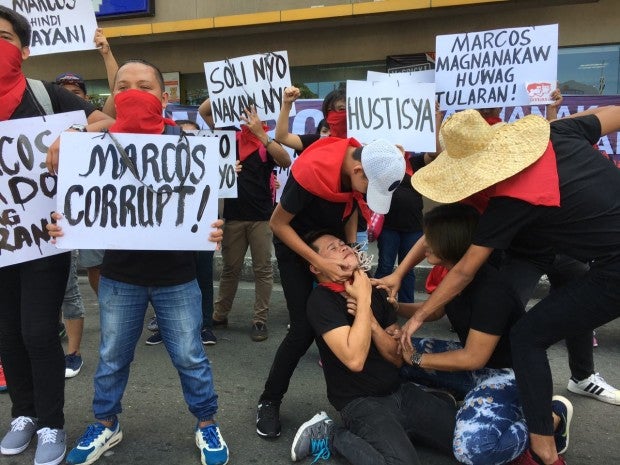 Members of the UP Samasa Alumni and Volunteers Coalition Against Marcos Burial in Libingan ng mga Bayani do the mannequin challenge in Quezon City to drum up support for their cause. CONTRIBUTED PHOTO

Read Next
Hunt begins for cause of crash that wipes out Brazilian team
EDITORS' PICK
Group vs COVID-19 vaccines planning mass protest? Not during ECQ, says Eleazar
NCR’s COVID-19 cases rise by 65% in past week; Pateros, Malabon at critical risk
86% of COVID-19 patients at PGH unvaccinated, says spokesman
The vivo V21 drops its price to equip the influencer in you
Why REIT investment makes sense
Smart reaffirms dominance as the Philippines’ fastest 5G mobile network
MOST READ
‘Hatid-sundo’ for APORs not allowed during ECQ — PNP
Pacquiao seeks PNP’s help, wants ‘forged’ PDP-Laban memo probed
Sex toys to tea: Taiwan celebrity loses China endorsements in Olympic row
Anxiety over paltry lockdown aid: ‘We will die of hunger’
Don't miss out on the latest news and information.