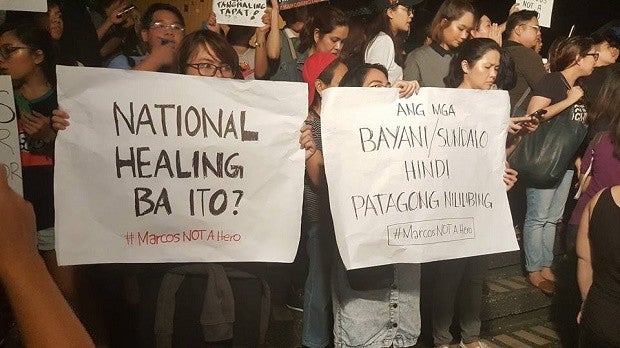 Rain and fatigue did not bother almost three thousand angry Filipinos who came to the Edsa People Power Monument after work to voice their rage against the heroes’ burial for the late President Ferdinand Marcos. JULIE AURELIO

They have been bashed as apathetic, indifferent and grafted to their gadgets, but on Friday, thousands of millennials proved themselves capable of rage and passion as they protested the surprise burial of ousted authoritarian President Marcos at the heroes’ cemetery.

In a move that caught petitioners against  Marcos’ burial at Libingan ng mga Bayani off-guard, the Marcos family flew in Marcos’ remains from Ilocos Norte province on Friday morning and interred them in an hour-long ceremony that featured a horseless carriage, a military march, taps, and a 21-gun salute.

The hero’s burial for Marcos, who ruled the country with an iron fist for two decades, was a campaign promise made by President Duterte.

Like other protesters from different generations, the millennials came straight from work or school, carrying handmade placards that echoed the sentiment of the day: “#MarcosNOTaHero.”

Other placards demanded: “Hukayin!, hukayin!  (Dig him out!)”   Other messages cursed Marcos in his native Ilocano language:  “Ukinam Marcos!” and “Nakababain ka, Marcos!,” which roughly translates to calling Marcos “a shame.”

A cheeky sign read: “No to Marcos! Yes to Ilocos empanada!”, while more incendiary ones declared: “Marcos puta, Digong tuta (Marcos, a whore, Digong, a lapdog)”

Other placards slammed President Duterte whom they blamed for the sneaky burial:  “Duterte, magkano? (How much?)” read one sign, while another said in dismay: “Niloko na naman tayo (We were fooled again).”

Other protesters took pride in Presidential Communications Secretary Martin Andanar’s description of anti-Marcos groups in his recent column:  “I am a temperamental brat!” proudly claimed one.

Around 3,000 people participated in the protest at the People Power Monument in Quezon City, which extended to early Saturday morning.

Even as the program officially ended around 10 p.m., the crowd showed no signs of leaving, standing at the roadside of Edsa and White Plains Avenue and calling on motorists to honk in solidarity:  “Busina, busina para sa hustisya (Honk for justice)!”

There was a palpable high every time vehicles honked and passengers cheered with them.

Volunteers passed around snacks and bottles of water, with accountant Aries Atienza, 28, who came straight from work, holding out a box of crackers, with the reminder: “Makibaka, huwag magutom! (Fight, don’t go hungry!), a play on the original rallying cry, “Makibaka, huwag matakot!)  (Fight, have no fear!)”

Atienza said he may not have witnessed what transpired during martial law, but “I learned history from my parents.” He added: “I don’t want to lose our freedom and democracy.”

Despite the rains, some stayed at the site overnight and peacefully dispersed early Saturday afternoon.

“Bayan Ko”, the popular protest anthem from the anti-Marcos rallies following the assassination of former Sen. Ninoy Aquino in 1983, once more became the crowd’s wake-upper.

The protesters at the People Power monument streamed in from the Katipunan schools—University of the Philippines Diliman, Ateneo, and Miriam College—and from Ayala Avenue, where young professionals filled up every available space past 9 p.m.  When police were dispatched to the area, the crowd chanted, “May pulis, may pulis, hindi tayo aalis!  (The police are here, but we’re not leaving).”

Onstage, where an informal program was ongoing, one protested held up a poster that read: “Ang mga bayani/sundalo, hindi patagong nililibing.  (Heroes and soldiers are not buried secretly).”  A few meters away, a woman held up her yellow umbrella to which was stuck a bond paper with the words: “Kasaysayan, ipaglaban!  (Defend history!) ”

Another placard made it clear that the rally just might be the start of more protests:  “Natanggap ko si Duterte bilang Presidente, hindi ko tatanggapin na bayani si Marcos (I’ve accepted Duterte as President; I’m not going to accept Marcos as a hero).”

Zenaida Mique, head of Claimants 1081, a group of martial law survivors,  appeared hopeful despite being played around by the Marcoses.  Maybe, she said, this secret burial would help the youth realize “what kind of people the Marcoses really are.”/rga