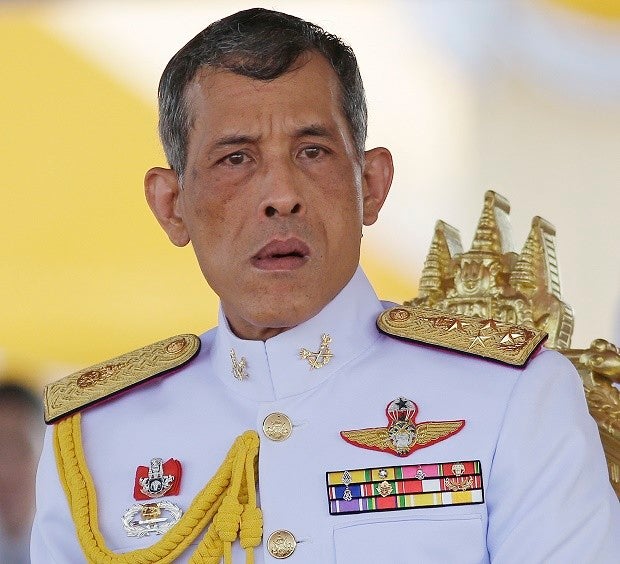 BANGKOK — Thailand’s parliament on Tuesday named Crown Prince Vajiralongkorn as the new king, completing a formal step for the heir to take the throne following the death of his father last month.

The Cabinet, following a 1924 law on succession, submitted Vajiralongkorn’s name to the National Assembly after a brief meeting, where members formally acknowledged him as the new monarch.

“I want everyone to give their blessings to the new king,” said National Assembly president Pornpetch Wichitcholchai. His statement was followed by a cheer of “Long live the king” by all assembly members.

Pornpetch said he would formally invite Vajiralongkorn to take the throne, the 10th in the Chakri dynasty, which was founded in 1782. He did not say when that would happen.

Vajiralongkorn’s father, the much-revered Bhumibol Adulyadej, who took the throne in 1946, died on Oct. 13 at age 88 after many years of ill health. In 1972, Bhumibol had designated Vajiralongkorn — his second child and only son — to be his successor.

The 64-year-old Vajiralongkorn, with a less intense interest in state affairs and a reputation as a playboy, does not command the same level of respect as his hardworking father. He has gone through divorces with three women who have borne him seven children, and his love life is still gossiped about, though privately because of harsh laws that mandate a prison term of three to 15 years for anyone found guilty of insulting the monarchy.

Prime Minister Prayuth Chan-ocha said shortly after Bhumibol’s death that the crown prince told him that he did not want to immediately assume the throne in order to allow time to mourn his father.

Prayuth’s military government declared a full year of mourning for public offices, and most Thais have been somberly dressed in black or white since the king’s death, while revelry has been discouraged.

Huge crowds have been paying respects to the king’s remains at the Grand Palace in Bangkok. His body will be cremated in an elaborate ceremony that may take place a year or more after his death.

The official coronation of Vajiralongkorn will take place only after the cremation. Bhumibol’s coronation was in 1950, four years after succeeding his brother King Ananda Mahidol, who died of gunshot wounds in unclear circumstances.

Although he attends the requisite royal ceremonies and in recent years filled in for his father for some ceremonial and diplomatic duties, Vajiralongkorn is generally a private figure.

The nightly royal news has frequently shown his three sisters carrying out official duties at home and abroad, while his activities are usually personal and unpublicized, outside of the occasional tabloid story in the country he is visiting. He has spent significant time in Germany, where he maintains several residences.

In 2015, however, he made two high-profile public appearances in Thailand, leading thousands of people in mass bicycling events to mark the birthdays of his mother and his father. Many saw the events as an attempt to boost his image as his succession to the throne loomed.

Efforts to prepare the prince for the throne began in earnest in his early teens. He was commissioned as an officer in the three branches of Thailand’s armed forces, and by age 14 was sent to boarding school in England. He continued his studies at a school in Sydney in preparation for Australia’s Royal Military College at Duntroon, which he entered in 1972 and graduated from in 1975, shortly after Thailand’s neighbors Cambodia, Laos and South Vietnam fell to communist forces.

As rumors about his personal life and behavior circulated widely, palace elders tried to encourage Vajiralongkorn’s enthusiasm for military duties with training stints abroad. A 1980 course of advanced military training in the United States whetted his appetite for flying, a passion carried on to this day, sometimes in the wide-bodied jets of national carrier Thai Airways./rga