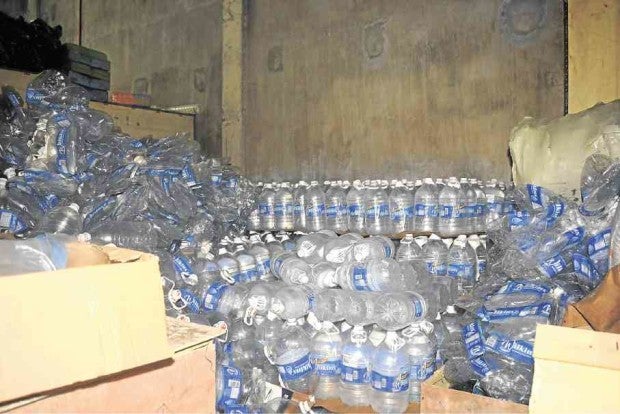 Hundreds of water containers, indicating unusual activity, are among the items found by police inside a warehouse being used as a drug lab in a village in Virac, Catanduanes. —FERNAN GIANAN

VIRAC, Catanduanes—A spike in electricity bills from P1,000 to P50,000 monthly, which indicated unusual power consumption, led police to a warehouse that served as a drug laboratory just a few kilometers from the town proper here.

A team of lawmen, led by acting Virac police director Chief Insp. James Ronatay, found the drug lab just 100 meters from the main highway in the village of Palta Small at a raid past 9 a.m. on Saturday.

Information about the existence of the drug lab came from several drug suspects from the Bicol region, who had told police that they got their supply from a source in Catanduanes.

Police worked on the information with the help of Google maps, locating buildings that bear the trademarks of one that is being used as a drug lab—they’re unusually large and located in remote areas.

A building in Palta Small stood out for its unusually high consumption of electricity.

Virac Mayor Samuel Laynes, citing records from the First Catanduanes Electric Cooperative (Ficelco), said during the first months of the year, the warehouse’s power bill ranged from just P1,000 to P1,500 a month.

Starting in June, the warehouse consumed an average of P50,000 a month in electricity.

The raiding team found the building locked and its owner, a Filipino-Chinese identified as Jayson Gonzales Uy, was nowhere to be found. Witnesses said Uy had left the area as early as Friday afternoon.

Found inside the warehouse, ringed by CCTV cameras, were two rooms keeping pieces of equipment that police said are being used to manufacture “shabu” (methampethamine hydrochloride).

Also found were hundreds of water containers, sealed plastic pails, several freezers, electrical equipment and three machines that have yet to be installed. Police said the machines are for the manufacture of shabu, too.

Angelica Balmadrid, owner of the property and wife of National Bureau of Investigation agent Eric Isidoro assigned to the anti-illegal drug team in Manila, confirmed that she had leased the land to Uy in March last year.

Balmadrid said Uy introduced himself as Paulo and a resident of Baclaran in Paranaque City.

Uy, according to Balmadrid, had said he wanted to build a plastic factory after seeing demand for plastic ware in Virac.

Construction of the warehouse was finished in September 2015. Balmadrid said she had not visited the land leased by Uy since.

When she accompanied the raiding team on Saturday, Balmadrid said she was surprised to see how big the warehouse is but knew it to be manufacturing only plastic products.

The structure is L-shaped and about two stories tall. It could not be seen from the highway, though.

When the raiding team entered the building, the noxious smell of chemicals greeted it.

Chief Insp. Josephine Clemen, Catanduanes crime laboratory officer-in-charge, said the machines that have not been installed indicated that the drug lab is being upgraded.