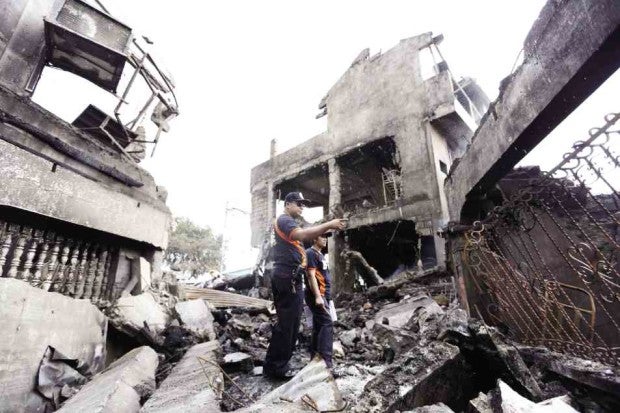 A policeman inspects the ruins of a firecracker factory after the Oct. 12 blast in Bocaue, Bulacan province. —NIÑO JESUS ORBETA

STA. MARIA, BULACAN—The firecracker factory explosion that killed three people, including two children, on Wednesday may have been due to a worker’s error, firemen said on Thursday.

Workers of AA Fireworks might have been rushing orders and had accidentally pounded a hole into a firecracker with a metal rod that triggered the blast, said Senior Insp. Carlos Estipular, Sta. Maria fire marshal.

“The spark [created by friction from the mallet striking the metal rod] would have led to the explosion,” he said.

Wilfredo Alonzo, 49, owner of AA Fireworks, was charged with reckless imprudence leading to multiple homicide when the factory exploded, killing Brylee Mayo, 5, and his sister, Ashley, 2.

Their mother, Mary Grace Mayo, 28, died while undergoing treatment in a hospital in the province.

The three went to the manufacturing area to bring food to Benjie Mayo, the children’s father, who worked in the factory that produces “kuwitis” (sky rockets).

Alonzo is a registered firecracker manufacturer, whose license to operate would have lapsed on June 30, 2017, said Supt. Raniel Valones, Sta. Maria police chief.

The explosion came more than a month after the Oct. 12 blast that killed two persons in Bocaue town.—CARMELA REYES-ESTROPE