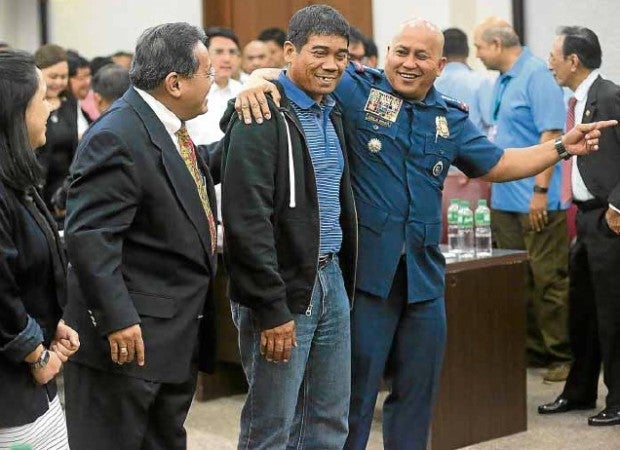 After seven hours of intensive grilling, lawmakers on Thursday called out Ronnie Dayan for the inconsistencies in his testimony that contradicted that of confessed drug lord Kerwin Espinosa and other witnesses in the investigations of the illegal drug trade in the national penitentiary.

They were baffled in particular at how Dayan admitted to taking money from Espinosa but denied knowing that he was transacting with a big-time drug dealer.

South Cotabato Rep. Ferdinand Hernandez urged the Department of Justice (DOJ) to carefully consider making Dayan a state witness “until he will tell the real truth and his participation.”

Hernandez asked how the former driver and paramour of Sen. Leila de Lima could admit to taking money from Espinosa, but claiming that he was unaware of Espinosa’s drug links.

He also questioned Dayan’s claims that he had no influence over De Lima despite having recommended some people to De Lima for promotion, such as former Bureau of Corrections (BuCor) officer in charge Rafael Ragos.

“It’s hard to believe that you have no influence over her in her decision-making,” Hernandez said.

Asked if De Lima consulted him in her plans to run for the Senate, Dayan said in Filipino: “No sir, I am out of such talks. She would be inclined to believe her siblings more, her mother or her ex-husband.”

Dayan admitted that he did not meddle in De Lima’s decisions since “she tends to follow her own mind, as if she did not trust me.”

He added that he only “recommended” some people for promotion to De Lima, and that she was still the one deciding these matters.

However, Hernandez cited the inconsistencies in Dayan’s claim that he had no influence over his ex-lover.

“In the DOJ, in the BuCor, they go to you. You recommended people and she followed you, but you’re saying that you had no influence,” the lawmaker said.

Dayan also maintained that he did not know of Espinosa’s drug links despite receiving large sums of money from him, supposedly on De Lima’s orders.

It was Dayan himself who suggested to De Lima that they go to Baguio City in November 2014 to meet with Espinosa, who wanted to see her.

Magdalo Rep. Gary Alejano was perplexed at how Dayan could have coordinated Espinosa’s meeting with De Lima in Baguio without getting his cell phone number.

“It’s so hard to coordinate without communication… That story is quite unclear to me, in this age that is illogical,” he told Dayan.

De Lima reportedly met with Espinosa on Nov. 22, 2014, at Burnham Park, even without Dayan not getting Espinosa’s cell phone number.

Alejano also noted the inconsistencies in Dayan’s claims that he was not the conduit of inmates at New Bilibid Prison to De Lima.

“The story just goes around, the script was not ironed out well. This means some witnesses are liars even though they claim to be telling the truth,” he said.

Sen. Panfilo Lacson, chair of the Senate committee on public order and dangerous drugs, said he was considering inviting Dayan, “if only to sort out the inconsistencies between his and Kerwin’s testimonies in relation to the payoffs made through him.”

The Lacson committee is expected to set a third hearing on the inquiry into the suspicious killing of suspected drug lord, Albuera, Leyte, Mayor Rolando Espinosa Sr., who was shot dead in a predawn raid while detained at a subprovincial jail in Baybay City on Nov. 5.

The younger Espinosa had testified in the Senate on Wednesday that Dayan was his contact in giving drug money to De Lima, and that it was the former bodyguard who had first approached him about the payoff purportedly to raise campaign funds for the former justice secretary.

De Lima has repeatedly denied the claims, saying both witnesses have been coerced to implicate her in  drug trade through “a very nice script” put together by her accusers from the Duterte administration.

The DOJ has placed Dayan under the provisional coverage of its witness protection program (WPP).

Justice Secretary Vitaliano Aguirre II made the announcement after several congressmen raised concerns about Dayan’s safety upon his release from custody of the House of Representatives.

He was arrested on the basis of a contempt citation for failing to heed the  justice committee’s subpoena to attend its hearings.

Oriental Mindoro Rep. Reynaldo Umali, the committee chair, said it was “quite risky” to continue holding Dayan inside the House grounds where he had  stayed since Tuesday.

“He is being given conditional admission to the WPP. You’re quite lucky, Ronnie, because this is not easily obtained. But anyway this is your decision, not ours,” he said.