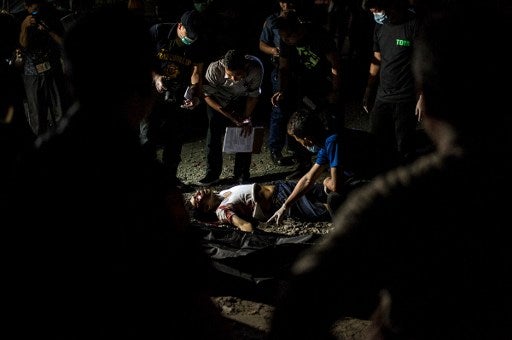 A drug suspect shot dead on a street in the Philippines. (AFP FILE PHOTO / NOEL CELIS)

BATANGAS CITY — A jobless man who was on the local police drug watch list was killed in Malvar town in Batangas province Thursday afternoon, police said.

The Malvar police chief, Senior Insp. Arwin Baby Caimbon, said Bernardo Castillo, 35, was walking home from his father’s house when he was shot by a gunman riding in tandem with another unidentified man on a motorcycle without a name plate in Barangay (village) San Piquinto at around 12:15 p.m.

Caimbon said that the victim was listed as a drug pusher by the Malvar police station.

As of this posting, the police were investigating to identify the two gunmen who immediately fled after the shooting.  SFM/rga