Villanueva: Youth suicide in PH on the rise 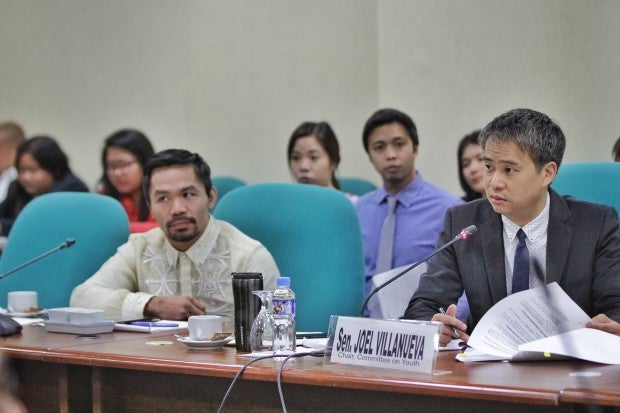 Senator Joel Villanueva, chairman of the Committee on Youth, stresses the need to intensify public education regarding mental health and suicide prevention, during the public hearing on Senate Bill No. 1163 or Youth Suicide Prevention Act.

Filipino kids as young as 10 years old have committed suicide because of depression, Senator Joel Villanueva said on Thursday, citing a report of the National Poison Management and Control Center (NPMCC) of the Philippine General Hospital during a Senate hearing.

Villanueva said the NPMCC reported during the hearing of the Senate committee on youth on Wednesday that 46 percent of the total suicide cases recorded since 2010 are from the youth.

The report, he said, showed that 30% of those who committed suicide are young adults aged 20 to 35 years old while the remaining 16% are teens aged 10 to 19 years old.

“Yung (Those who are) 10 years old to 12 years old, [comprise] around two to three percent,” the senator, who chairs the committee, said in a text message.

READ: What we should know about teen suicide

While the rate of youth suicide in the country was relatively low compared to neighboring countries in the region, Villanueva said, “the bad news is that the suicide rates in the country have been on the rise.”

“Incidence is highest on young adults aged 15 to 24 for both boys and girls according to the Philippine Psychiatric Association,” he said in a statement.

READ: In the Know: Suicide cases in the Philippines

The senator also acknowledged that there are still cases which are left underreported due to social stigma against people with suicidal tendencies.

“Some people are afraid to report or consult their suicidal ideation because they do not want to be judged as someone with mental disorder. This stigma must be addressed and support system especially in schools must be readily available,” he said.

Villanueva  sees the need to intensify education on mental health and suicide prevention. He stressed the need to increase investment in research on these aspects, and a bigger budgetary allocation for medical support and services which are crucial to prevent suicide.

Schools, he said, should also be mandated to have suicide hotlines and the appropriate system to support this.

“Access to healthcare and support system are very limited. We should intensify public education and mandate the setup of support systems in schools and communities to help prevent suicide,” said the senator.

He also noted that out of the 490 psychiatrists in the country based on the report of the National Center for Mental Health, only 35 of them are child psychiatrists.

“Clearly, there is a need to expand the number of psychiatrists, especially child psychiatrists in the country. We must also empower, train, and increase our municipal health officers so we can pay more attention to undiagnosed, untreated individuals,” Villanueva said.

The bill also proposes to standardize collection and management of data and promote evidence-based research on youth suicide, and institutionalize the 24/7 national hotline for suicide prevention.

Villanueva also backs the passage of the Mental Health Act, which he co-authored, and the need to revisit the country’s National Mental Health Policy Framework.

“Suicide is preventable, it is a public health issue that can be addressed. Together, we can do something about it,” he further said. CDG/rga