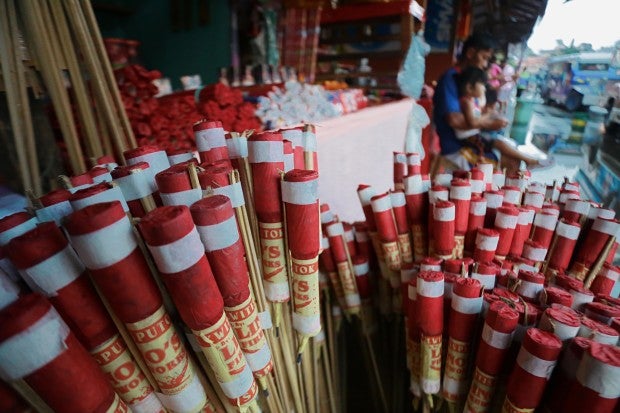 MANILA — A 42-year-old Indian national was wounded when firecrackers exploded inside her house in Malabon city.

Sukwhinder Kaur, 48, was rushed to the MCU hospital for the treatment of minor burns.

Kaur told police that the owner of the firecrackers was a certain Deepak, 22, an Indian businessman. No surname has been provided yet.

Chief Inspector Lucio Simangan Jr., said a fire that started about 11:30 p.m. on Tuesday, caused the explosion.  The fire did not last long and was immediately put out past 12 a.m. Wednesday.

The initial cause of the fire, which led to the firecracker explosion, was faulty electrical wiring, SFO3 Alvino Torres said.

The wires were spliced inside the built-in wooden cabinet that contained the firecrackers.

The flames caused by the wires licked the firecrackers, which then exploded.  SFM

Read Next
US, China agree on tougher UN sanctions against North Korea
EDITORS' PICK
Smart offers wireless fiber-like speeds to Filipino homes with country’s first 5G Prepaid Home WiFi
Legarda: Ending Violence Against Women, a cause for all
This new condo in the South will make you want to turn a new leaf
National COVID-19 vaccination drive gets over 5.3 million people vaxxed so far
Pandemic prognosis: Where does it go from here?
Google won’t accept election ads for 2022 national polls
MOST READ
Bongbong Marcos to face another disqualification case
Christine Bersola, Julius Babao cleared of cancer after colonoscopy, endoscopy
Former PM Abe says Japan, US could not stand by if China attacked Taiwan
New Comelec commissioner gets CA nod
Don't miss out on the latest news and information.