AFP rewards a total of P5.9-M to tipsters vs Abu Sayyaf 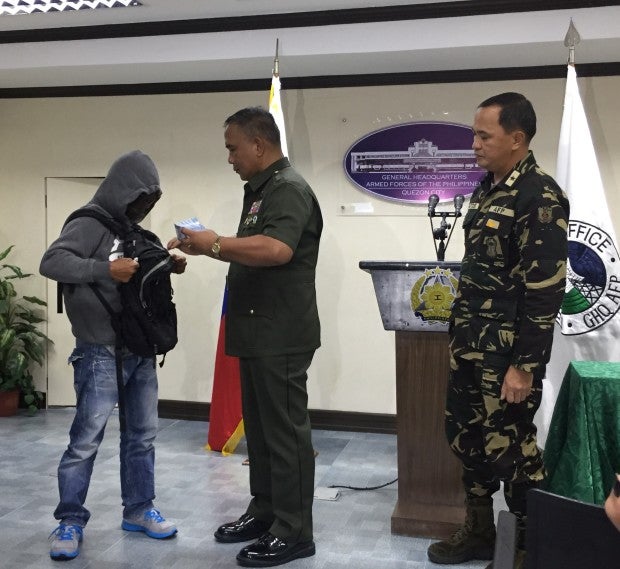 AFP chief General Ricardo Visaya on Wednesday hands out reward money worth P5.9 million to tipsters that led to the neutralization of Abu Sayyaf members. The rewards system was established in 2001 to encourage civilians to help out in providing information that will help track down wanted personalities. FRANCES MANGOSING

The Armed Forces of the Philippines on Wednesday handed over a total of P5.9-million reward money to two tipsters that gave information leading to the neutralization of Abu Sayyaf members.

The first tipster received P5.3 million for the neutralization of Abu Sayyaf sub-leader Sihatra Muallam Asmad also known as Latip. He was involved in the kidnapping of foreign guests and workers of Sipadan Beach Resort in Sabah, Malaysia, in April 2000 and members of the Jehova’s Witnesses in Patikul, Sulu, in August 2000.

Asmad, who was wanted for six counts of kidnapping and illegal detention, was killed in a law enforcement operation in November 2014, at Sitio Patong-Patong, Brgy. Duyan Kaha in Parang, Sulu.

The other tipster, meanwhile, received P600,000 for providing information to military forces that led to the arrest of Abu Sayyaf member and cohort Suhud Yakan in May 2014 in Isabela, Basilan.

Yakan was wanted for kidnapping and serious illegal detention; kidnapping 15 and killing of two residents of Golden Harvest Plantation in Brgy. Lantawan, Basilan, in June 2011.

Visaya said they hope the reward system will compel other people to step up in the fight against terrorism.

The reward system was established in 2001 to encourage civilians to help out in providing information to arrest wanted personalities who are threats to national security and public safety. TVJ