Rift brews between 2 groups of cops

COTABATO CITY—Their families have expressed fears that a brewing rift could lead to bloody clashes between two groups of policemen who are detained over the horrific Maguindanao massacre seven years ago.

PO2 Hernani Dicipulo had been admitted to the Witness Protection Program (WPP) before he was found dead at the Bicutan jail on Feb. 6, 2012.

His wife, Norhaya Nanding-Dicipulo, said her husband did not tell her that he had turned state witness, and that she learned about it only when he waved before her his WPP allowance of P3,000 a month from the Department of Justice (DOJ).

Reports said Dicipulo jumped to his death from the rooftop of the building of Bicutan Detention Cells after an early morning prayer with fellow Muslim inmates.

Jalilah Maguid, president of the 11/23 Advocates, one of the two groups of families of detained policemen, said danger lurked inside the facility.

Maguid’s group has renewed its call for justice, considering its members also “victims of injustice.”

Because of possible conflict of interest, the Public Attorneys’ Office (PAO) could hardly represent their husbands, with PAO lawyers also subscribing affidavits of plaintiffs in the main cases, she said.

The families of the detained policemen said that because they contradicted each other in their sworn statements, those from the 1407th and 1408th Philippine National Police Mobile Groups faced the risk of violent confrontations inside prison.

A mother of one of the policemen said her son had told her about a fistfight between two policemen inside their cell.

So far, the National Police Commission (Napolcom) has dismissed at least 10 of the detained policemen and has suspended more than 40.

Their actions were proclaimed in a resolution the Napolcom issued in November 2013.

A brother of another policeman survived a gun attack in Datu Piang, Maguindanao province, in 2010, but he eventually died of liver disease, secondary to internal organ poisoning.

With the information that Dicipulo was admitted to the WPP before his death, his family doubted the report of prison officials that he had committed suicide.

A member of the 1408th PNP Mobile Group, he was charged and arrested in early 2010, along with dozens of policemen in connection with the Nov. 23, 2009, Maguindanao massacre. 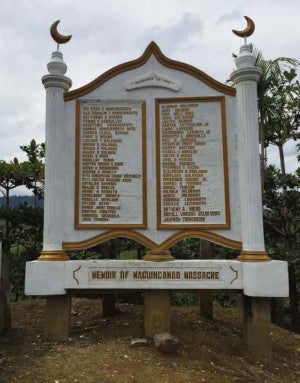 REMEMBERING THE DEAD The names of 58 people, 32 of them journalists and mediaworkers, who were massacred in Ampatuan town in Maguindanao province exactly seven years ago, are engraved in a memorial put up on the site of the killings. —JULIE S. ALIPALA

Some members of the Ampatuan clan, principally former Datu Unsay Mayor Andal Ampatuan Jr., are standing trial for the killing of 58 people, 32 of them journalists and media employees.

In 2010, a relative of Dicipulo’s sought reporters for an anonymous interview about an “option” his relatives had wanted him to consider, and to consult the victims’ families if they would not oppose “at least one of the accused policemen turning state witness.”

The relative, who only identified himself as a “retiring officer,” said he was willing to help provide for Dicipulo a collaborating lawyer for his testimony to help prosecute the plaintiffs.

The message was said to have been relayed to one of the leaders of the heirs, one PO1 Oliver Cablitas, who “welcomed that development.”

That plan, however, pushed through in another way lawyers for the PNP succeeded in a 2012 court petition to consider all members of the 1408 PNP Mobile Group to become state witnesses for the prosecution.

Norhaya said she received the monthly WPP allowance from the DOJ for six months, from late 2012 to January 2013.

But after Dicipulo died, Norhaya said she never received from the PNP the benefits claim she had filed for as beneficiary, except for the burial expenses.

She said she was told that Dicipulo’s claim was under review by the Camp Crame legal department, as his case had not been decided at the time of his death.

Norhaya said that because of fear, her family could not press for reinvestigation of her husband’s death, even if her friends had told her that would help hasten the legal review of the benefits claim.