Priest against Davao slays back to hound Digong | Inquirer News

Priest against Davao slays back to hound Digong 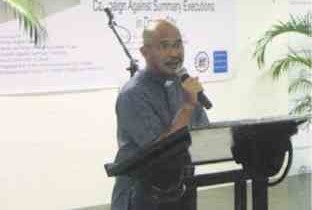 Now is not the time to be afraid Fr. Amado Picardal Spokersperson Network Against Killings

The Catholic priest who was among the first to condemn extrajudicial killings attributed to the so-called Davao Death Squad (DDS) is taking the fight beyond the home turf of President Duterte and into the national stage.

“Now is not the time to be afraid,” said Fr. Amado Picardal, an outspoken clergyman who helped investigate the spate of murders in Davao, a city long-dominated by the Duterte family, from 1998 to 2011.

Picardal serves as one of the spokespersons and convenors of Network Against Killings (NAK) Philippines, which has linked up with human rights watchdogs to document EJKs targeting persons being linked to the drug trade under the four-month-old Duterte administration.

“We’ve seen this in Davao and (it’s) now on a nationwide scale. This is very alarming,” he said in an interview with the Inquirer. “We are trying to build up cases (against) those responsible for the killings. There will be cases to be filed in the near future.”

Two lawyers from Davao who also helped expose the DDS have joined NAK, he said, referring to Manny Quibod and Mary Ann Arnado.

Quibod is the dean of Ateneo de Davao’s College of Law, while Arnado is the secretary general of Mindanao People’s Caucus.

Picardal belongs to the Congregation of the Most Holy Redeemer and currently works as executive secretary of the Catholic Bishops of the Philippines-Basic Ecclesiastical Community Office.

For Picardal, denouncing the killings does not mean siding with the drug syndicates and pushers. Drug use and peddling are wrong, he said, “but there are other ways to deal with these problems. You don’t just kill. No one is above the law.”

Fighting EJKs that “seem to be state-sanctioned” is nothing new for Picardal, but the priest said the sheer number of killings nationwide since Mr. Duterte assumed power should finally move people to speak out.

“We monitored the killings of the death squads in Davao from 1998 to 2011, and there were 1,424. Now, in just a matter of four to five months, they have reached almost 5,000. So, there’s really a pattern of total disregard for due process and the right to life.”

What’s further alarms NAK is the lack of public outcry against the killings, he said.

“We want to awaken the conscience of the people and (stress) that this is wrong. We hope more will oppose it,” he said.

Picardal said NAK hoped to see the families and relatives of EJK victims joining the group, and involve more parishes and grassroots organizations in the campaign.

NAK Philippines will be officially launched at Baclaran church at 3 p.m. today, with Manila Auxiliary Bishop Broderick Pabillo expected to grace the event.

In a statement, NAK said the Duterte administration “not only made the human rights situation in the Philippines worse—it has brought it to a whole new and more dangerous level as the killings in its war on drugs continue.”

“Unlike previous administrations that have denied complicity in past extrajudicial killings, the Duterte government encourages these abuses and even promises protection to the perpetrators…’’ it noted. “President Duterte campaigned on a platform of reducing crime and illegal drugs. But instead of fixing the country’s long-standing rule-of-law problems, he and his top officials incite and encourage law enforcers to commit even more killings and even more abuses.”