President said Marcoses did not tell him exact date of interment; he told clan, 'Do as you wish'
By: DJ Yap - Reporter / @deejayapINQ
Philippine Daily Inquirer / 04:08 PM November 21, 2016 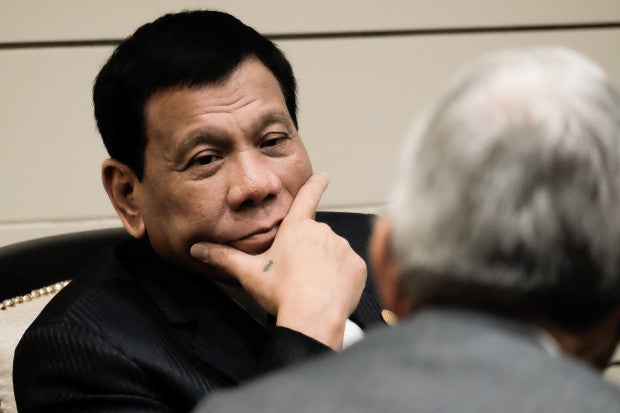 President Rodrigo Duterte discusses matters with some of his Cabinet Secretaries before the bilateral meeting with China and Russia at the sidelines of the Asia-Pacific Economic Cooperation (APEC) Leaders’ Summit in Lima, Peru on November 19. RENATO LUMAWAG/ Presidential Photo

LIMA, Peru — President Duterte on Sunday told people protesting the burial of the late dictator Ferdinand Marcos at the Libingan ng mga Bayani to learn to “live with their grief” and their hatred.

“So there was really a deep wound somewhere in the country. But for those who cannot really forgive, that’s the hard part. You just have to live with your grief, and that grief is hate. That is the problem,” he said.

Speaking to reporters after his participation at the Asia-Pacific Economic Cooperation (Apec) summit here, Mr. Duterte stood by his decision to allow Marcos’ remains to be interred at the cemetery for heroes.

He took exception to a newspaper article that noted the irony of the President’s own late mother Soledad Duterte, a leading figure of Yellow Friday Movement in Davao City, having protested Marcos’ rule during the final days of Martial Law.

“You know, I am a public employee. I decide on what is lawful and what is not. I am now called upon or I was called upon to decide whether it would be lawful for Marcos to be buried in the Libingan ng mga Bayani or it would be an illegal act,” he said.

“My mother’s cause or the causes she fought in her life, that’s hers. But just because she is my mother I cannot state to you that Marcos cannot be buried because according to my mother he was a dictator,” Mr. Duterte said.

The President insisted that he had not known about the date of Marcos’ burial at the Libingan, which was marked by secrecy.

“In all honesty, I’m telling you: I knew nothing about it. They only asked me when would be the ‘appropriate time for me? I said, “do as you wish’,” he said.

“I didn’t ask them, and why would I ask? I allowed it already so what’s it to me? What would I get if I had known in advance whether he would be there for the interment on that day?” Mr. Duterte said.

He said as much as 98 percent of Ilocandia, or Ilocano-speaking Filipinos, harbored sentiments about why Marcos was being treated “unfairly.”

“To me, again, I have only two answers: He was a president, he was a soldier. His name appears on the record, it was recognized, he had a valor medal for his deeds,” Mr. Duterte said.

He said the question of whether Marcos was a hero was a case of “a word against their word.“

“There are only two criteria [in law to be buried at Libingan]. And the problem is he fit on both counts: as soldier and/or president,” Mr. Duterte said.  SFM/rga