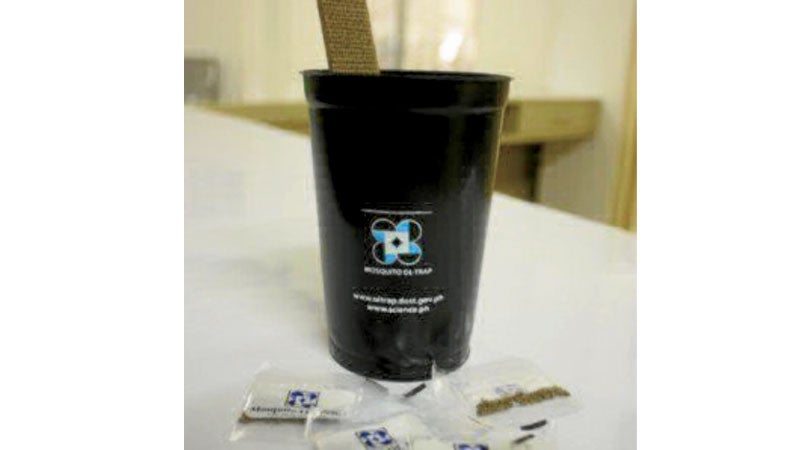 Antidengue trap: one of the recipients of the R&D 100 Awards

A ready-to-eat chicken porridge for hungry disaster survivors and an antidengue device developed by Filipino scientists have made it to this year’s R&D 100 Awards, widely known as the “Oscars of Invention,” joining the ranks of highly innovative technologies and services from around the world.

“By becoming an R&D 100 Award Finalist, your institution is now a member of a selected R&D community recognized for their excellent contributions to advancing science and technology,” said Bea Riemschneider, editorial director of the ABM Science Group of the R&D Magazine, in announcing this year’s winners.

According to its website, it has served research scientists, engineers and technical staff members in laboratories around the world. It is also part of the Advantage Business Media Science Group based in New Jersey.

Since 1963, R&D Magazine has annually given recognition to the top 100 innovative technologies of the year through its R&D 100 program.

“Pack of Hope” was developed by DOST-Itdi’s packaging technology division in 2013 to address hunger in disaster-hit areas in the country.

The “instant” meal was designed as a disaster mitigation/relief food that can be promptly distributed to disaster survivors and emergency service responders and providers.

Ready to be consumed without preparation straight from the package, it is conveniently packed in an easy-open-stand-up retort pouch.

It has a shelf life of at least a year and its packaging is lightweight, which can withstand harsh conditions during land, sea and aerial distribution.

It can withstand an aerial drop of about 400-500 meters, especially in flooded areas or disaster zones that cannot be accessed by land, according to DOST.

Arroz caldo, or rice porridge, is a simple hearty dish considered by Filipinos as a “comfort food,” especially for the sick.

The product underwent field testing and validation studies in collaboration with the Department of Social Welfare and Development and various local government units and has been successfully commercialized since three years ago.

Initiated by the DOST-Itdi’s chemical and energy division in 2011, the OL Trap is an antidengue device that controls and prevents Aedes mosquitoes from developing to the adult stage, which in turn reduces the transmission of the dengue virus.

The trap works by attracting female mosquitoes to lay eggs on the paddle drenched with an organic solution-safe ingredients commonly used for food preparation, which kills the eggs and larvae, preventing mosquitoes from maturing.

The device has since been commercialized and rolled out in households and in public schools nationwide.

This year’s R&D 100 Award winners were recognized in a black-tie dinner on Nov. 3 in Washington D.C.

The winners were selected by an independent panel of more than 50 judges, representing many of the industry’s leading R&D companies and national laboratories.

Read Next
Pope closes jubilee of saints, refugees
EDITORS' PICK
UP-PGH wards for COVID-19 patients finished in 5 days
Cebu City closes its borders
IATF: Food firms to operate with 50% of workforce during Luzon quarantine
BREAKING: 1,075 people in PH has coronavirus disease – DOH
Style and music journeys with Claudia Barretto
DILG to stranded workers: ‘Stay where you are’ until Luzon-wide quarantine is over
MOST READ
Pacquiao to seek probe on leaked private letter from Barangay Dasmariñas
All 3 COVID-19 positive patients in Bicol sent home
Nurse who assisted patient ‘PH744’ in Nueva Vizcaya tests positive for COVID-19
No more bread? Company forced to limit production
Don't miss out on the latest news and information.