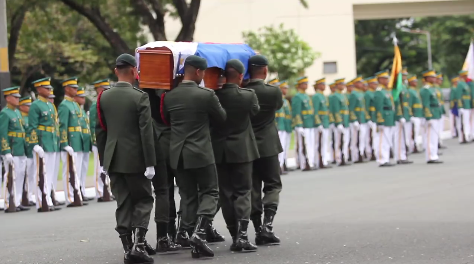 CEBU CITY—Three prominent martial law detainees in Cebu were taken aback when they learned about the surprise burial of the late President Ferdinand Marcos at the Libingan ng mga Bayani on Friday noon.

“I am devastated by the news. I am just so sad and disappointed today. A hero’s burial for Marcos is a great injustice and disservice to the Filipino people; a major mistake and an insult to those who were tortured, killed, and detained during the Marcos era,” said former Rep. Antonio Cuenco of Cebu City South District in an interview.

He called on Filipinos to hold a nationwide indignation rally against Marcos’ burial at the Libingan.

“He should be brought back to Ilocos. Putting him at the Libingan ng mga Bayani is like rubbing salt to the wounds of those who suffered during the martial law,” said Cuenco who was detained three times for joining public assemblies against Marcos.

“I was surprised when I learned about his burial, but I am sure that will not erase history. We will never forget the massive human rights abuses he committed; how he stole money from government coffers, and the dictatorship,” he said.

Paredes, a former executive judge of the Cebu City RTC, said the Marcoses committed a legal blunder by burying the late President even without the final approval of the Supreme Court.

He said the high court’s ruling has to be final before it could be executed.

“What I know is there was a motion for reconsideration filed before the Supreme Court to contest the decision to bury him at the Libingan ng mga Bayani. Legally speaking, burying him there, without a final judgement, was illegal,” said Paredes who was also detained during the martial law.

“What if the Supreme Court will reverse its earlier decision, shall we dig him out from the grave? The Marcoses hastily buried him. They should have waited,” he added.

“This is a sad day for the country. Thanks to President Duterte and the nine justices of the Supreme Court. He (Marcos) is the only kind of ‘hero’ who is smuggled to the Libingan ng mga Bayani,” he said.

Barcenas was detained for three months during the imposition of martial law in 1972 for joining groups that opposed Marcos.

Marcos was buried at the Libingan ng mga Bayani around noon on Friday.

He was accorded military honors, including a 21-gun salute.

There was also a flower drop.

Last Nov. 8, the Supreme Court, voting 9-5-1, dismissed the consolidated petitions seeking to stop Marcos’ burial at the Libingan ng mga Bayani, saying said there was no law prohibiting the burial at the heroes’ cemetery despite allegations of human rights violations and corruption against the late dictator. RAM/rga