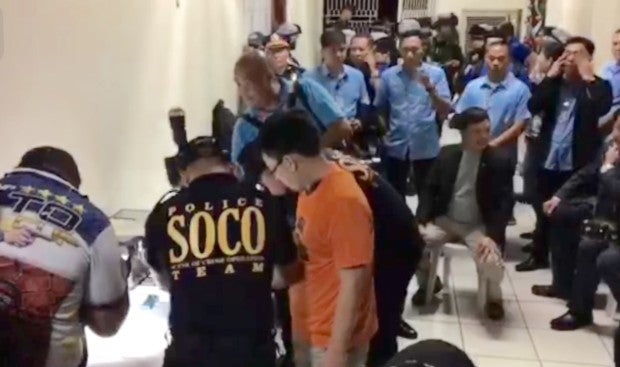 In videos sent by PNP spokesperson Senior Supt. Dionardo Carlos to the media, Dela Rosa, while in the airport, said he would let Espinosa wear a bulletproof vest for his protection.

At exactly 4:25 a.m., the convoy bearing Dela Rosa and Espinosa arrived in the police camp.

Shortly before Espinosa arrived in Crame, his family and counsel went to the PNP’s Anti-Illegal Drugs Group (AIDG) office inside the camp.

Afterwards, Dela Rosa will present him to the media “to show that (Espinosa) is secured under the PNP’s custody.”

Security inside Camp Crame was also raised ahead of Espinosa’s arrival.

Members of the media covering the arrival were not allowed to bring bags inside NHQ building where Dela Rosa will present Espinosa in a press conference.

The building was heavily guarded by personnel of the PNP Special Reaction Unit, Explosives and Ordnance Division and K9 units.

Last Nov. 5, his father Albuera, Leyte Mayor Rolando Espinosa Sr. was killed inside his cell at the Baybay City sub-provincial jail when the police conducted a search operation.

Police said the mayor and his fellow inmate Raul Yap died in a shootout with the Criminal Investigation and Detection Group (CIDG) Region 8 and Regional Maritime Unit (RMU) operatives. CDG