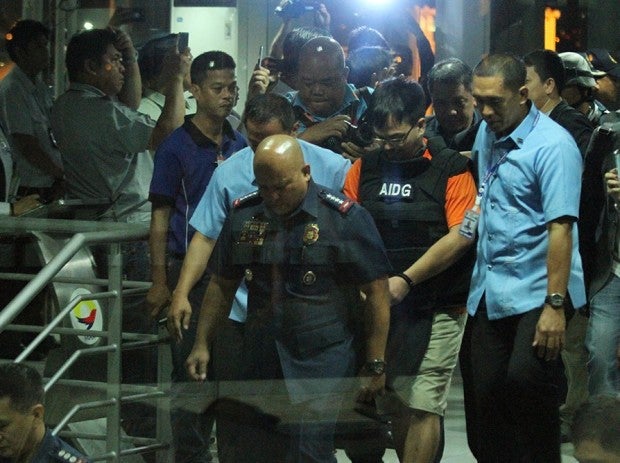 Espinosa was handcuffed and clad in a black-and-orange shirt worn over cream-colored shorts. The AIDG team made him wear a bulletproof vest.

With Espinosa on the flight was another AIDG team led by Chief Supt. Albert Ferro.

The PNP considers Espinosa precious cargo because of the possibility of his turning state witness to pin down high-profile personalities involved in the country’s illegal drug trade.

At least an hour before Espinosa arrived, the Philippine National Police (PNP) had already tightened security at NAIA Terminal 3.

Kerwin is the son of Rolando Espinosa Sr., former mayor of Albuera town in Leyte, whom President Rodrigo Duterte named last August as among local government officials involved in the illegal drugs trade.

The son went into hiding shortly after that.

But police were able to arrest the elder Espinosa last October 4, on charges of possession of illegal drugs and firearms.

The former mayor, who was up at the Leyte Sub-Provincial Jail in Baybay City, agreed to cooperate with authorities. Hoping to become a state witness, he gave Chief Insp. Jovie Espenido, chief of the Albuera Municipal Police Office, two notebooks – the so-called pink and blue books – containing the names of people involved in illegal drugs and their protectors.

On Nov. 5, the elder Espinosa was killed in jail in an alleged shootout with a team of officers from the Criminal Investigation and Detection Group (CIDG) in Eastern Visayas, who were about to serve him a search warrant, along with another inmate, Raul Yap.

In a hearing conducted by the Senate, Chief Insp. Leo Laraga, who led the CIDG team, admitted that it was he who shot the former mayor.

The Senate Committee on Justice, headed by Sen. Richard Gordon, suspected that Espinosa’s killing was premeditated and not at all the result of a shootout.

De la Rosa, who apologized for his shortcoming in protecting the elder Espinosa, vowed to ensure that the son would remain alive to tell his story.

The younger Espinosa would be detained under tight security in Camp Crame, headquarters of the PNP, in Quezon City. /atm 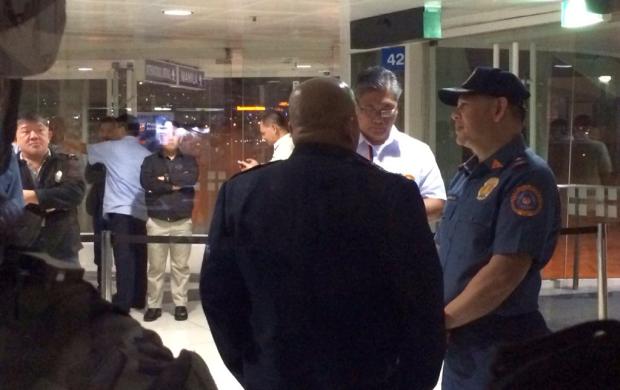 Read Next
Int’l liver experts to speak at hepatology convention
EDITORS' PICK
NCR’s COVID-9 alert level may be downgraded from 3 to 2 soon — DOH
What’s at stake for every fighter at ONE: NextGen
Legarda emphasizes role of ICC/IPs in nation building this IP month
Isko Moreno bares ‘two-pronged’ approach to rehabilitate MSMEs
Gordon calls 2 Pharmally execs ‘Senate fugitives’ after no-show in probe
Climate Change Commission and Nestlé PH to discover sustainability-focused solutions
MOST READ
LJ Reyes says Paolo Contis made ‘no efforts’ to talk to her after their split
Despite being called arrogant, Yang says he ‘loves’ PH and ‘loves doing business here’
PDP-Laban Cusi wing Senate bets willing to give way to Duterte
Drivers with no traffic violations can now renew licenses for 10 years
Don't miss out on the latest news and information.