85% of Pinoys satisfied with drug campaign–SWS 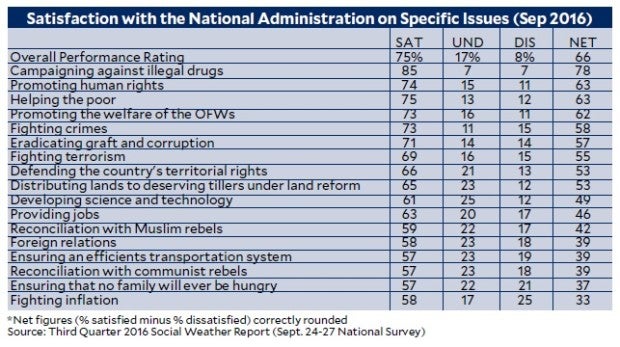 Amid criticisms from US President Barack Obama and the European Union that the Duterte administration’s bloody war on drugs had resulted in grave human rights violations, a majority of Filipinos thought otherwise and rated the antinarcotics drive “excellent.”

Results of a Social Weather Stations (SWS) poll found that 85 percent of 1,200 adult respondents were satisfied with the campaign against illegal drugs, while 7 percent were either dissatisfied or undecided, giving the administration a net satisfaction score (satisfied minus dissatisfied) of “excellent” +78.

The nationwide and noncommissioned survey, conducted on Sept. 24-27, had a margin of error of plus-or-minus 3 percentage points.

The survey also found that 74 percent were satisfied with the administration’s promotion of human rights, while 11 percent were dissatisfied and 15 percent undecided, resulting in a “very good” +63 net satisfaction score.

SWS said 75 percent were satisfied with the administration’s overall performance, while 8 percent were dissatisfied and 17 percent expressed indecision, yielding  a “very good” net satisfaction score of +66.

It was a record-high that was similarly achieved by the administration of former President Benigno Aquino III in June 2013.

Malacañang on Thursday expressed its gratitude to the public for the Duterte administration’s high net satisfaction rating in the latest SWS survey.

Presidential Communications Secretary Martin Andanar said the +66 net satisfaction rating of President Duterte’s leadership was a “source of inspiration and strength to the President and his entire team to double their time and energy.”

“Let these survey results not lull us to complacency. The President, as we all know, has been elevating the consciousness of our people from the gravity of the drug problem and the threat of terrorism and lawlessness,” Andanar said in a statement.

“This means much work has to be done and we all need to roll up our sleeves and buckle down to work and get things done,” he added.

It also obtained “good” net ratings in efforts at reconciling with Muslim rebels (+42), providing jobs (+46) and developing science and technology (+49).