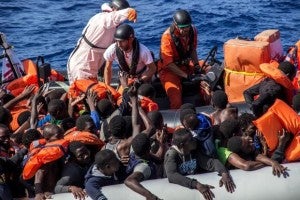 Medecins Sans Frontieres (MSF) field coordinator, Michele Telaro, together with two members of the Bourbon Argos crew, distribute lifejackets during a rescue operation in the Mediterranean Sea, Wednesday, Oct. 26, 2016. The UN refugee agency said Wednesday that the death toll for migrants in the Mediterranean has reached at least 3,800 this year so far, making 2016 the deadliest year on record. —BORJA RUIZ RODRIGUEZ/MSF via AP

MILAN — Four Mediterranean Sea shipwrecks in the past 2 ½ days have caused about 340 migrants to die or go missing, making 2016 the deadliest year on record for asylum seekers risking the dangerous voyage to Europe, a migration organization said Thursday.

The shipwreck causalities brings to over 4,500 the number of migrants who have died or disappeared crossing the Mediterranean so far this year, according to the International Organization for Migration figures. The total compares with the 3,770 people reported dead or missing last year, the previous record.

The organization said Thursday that the death toll is rising as smugglers force departures despite rough, winter seas.

“What is shocking is the cruelty,” Flavio Di Giacomo, Italy spokesman for the International Organization for Migration, said. “The traffickers are forcing people to depart despite the prohibitive sea conditions. When they get to the beach, migrants who don’t want to go are forced to get on board, even with violence.”

Di Giacomo said traffickers care little if the migrants make it alive. “Once you pay, you can’t go back,” he said.

The count from the recent shipwrecks was based partly on the rescue overnight by Doctors without Borders of 27 migrants, who reported that more than 130 people had been on board their rubber dinghy when it sank, Di Giacomo said. Seven bodies have been recovered.

In another incident, 15 survivors rescued by a mercantile ship about 30 miles from Libyan shores reported that some 135 people died when their smugglers’ boat capsized. Five bodies were recovered.

Another ship rescued 23 migrants, who reported that more than 120 people had been on board when they sank overnight Tuesday. Six bodies were recovered Tuesday in the fourth rescue, of 114 people.

The impossibility of recovering bodies of migrants lost at sea means that humanitarian organizations must rely on the accounts of survivors to tally the number believed drowned, as tens of thousands fleeing war, poverty and persecution seek to reach safety in Europe in smugglers’ boats.

The European Union’s Frontex border agency says a record 27,500 migrants were rescued and brought to Italy in October, the highest monthly total ever in the central Mediterranean and twice as many as in previous months.

So far this year, nearly 160,000 migrants have arrived in Italy, up 13 percent from last year.