‘Or I will lecture you on the finer points of civilization’
By: Nestor Corrales - Reporter / @NCorralesINQ
INQUIRER.net / 07:24 PM November 17, 2016 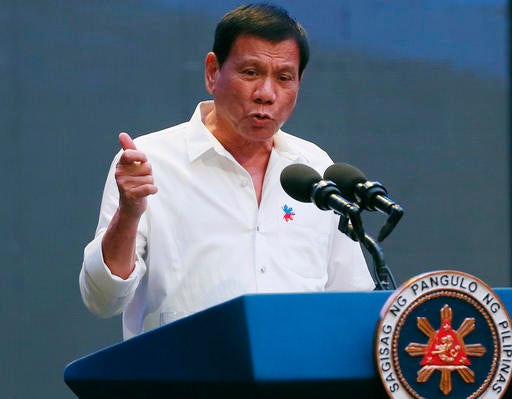 In this Oct. 13 photo, President Rodrigo Duterte gestures during a speech addressed to businessmen in Pasay City. AP

President Rodrigo Duterte has warned world leaders not to call him out during the Asia-Pacific Economic Cooperation (Apec) leaders’ meeting in Peru or he will lecture them about the “finer points of civilization.”

“Huwag niyong solohin ’yung kapangyarihan niyo. Kayo lang parating tigas eh, kaya lang, you threaten us as if we are your laborers. I’m the President of the Philippines. I’m not their President. I don’t care. I don’t give a shit,” he added.

The President has received global condemnation for his brutal crackdown on illegal drugs and alleged human rights violations.

During his first international appearance at Association of Southeast Asian Nations (Asean) summit in Laos in September, Duterte surprised his fellow leaders after he showed them an image depicting violence against Filipinos during the US pacification campaign in Western Mindanao at the beginning of the last century.

Duterte, known for his profanity-laced speeches, has repeatedly slammed the United States, the European Union and the United Nations for criticizing him on his war on drugs.

But in his pre-departure speech, the President said his attendance to the Apec “will be guided only by the best interest of the people.”