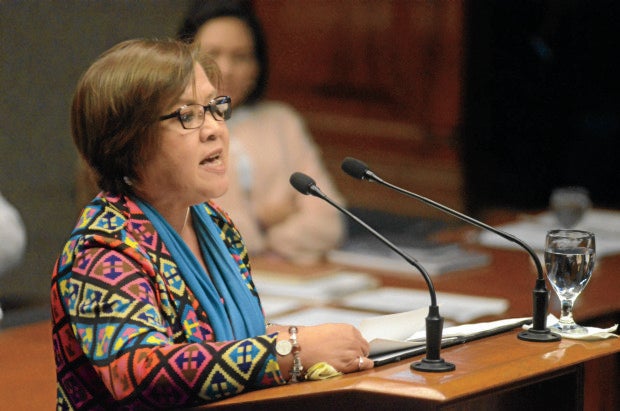 Senator Leila de Lima said her former driver, Ronnie Dayan, was separated from his wife when they had an affair.

De Lima said she was just being truthful when she first admitted her past affair with Dayan in an exclusive interview with Winnie Monsod on “Bawal ang Pasaway kay Mareng Winnie” aired on GMA News TV last Monday night.

Dayan had allegedly collected drug money for De Lima at the New Bilibid Prison when she was Justice Secretary.

“I can’t be truthful in one aspect, and untruthful in another. I’ve been very truthful about my innocence ko on the allegations against me about my alleged drug trade. I can’t be untruthful with respect to my personal life,” she said on Wednesday.

“Tinanong ako ng diretso, so sinagot ko ng diretso (I was asked directly so I answered directly)…because I don’t lie. I have difficulty lying so ano ba naman yung na aminin ko yung (so I decided to admit a) past episode of my life.”

“And my marriage has been annulled and then separated naman yun (Dayan) (was separated) when that happened at that time. Things happened. Hindi ako pwedeng magsinungaling (I can’t lie)…because that’s the truth,” De Lima said.

But the senator insisted that she was innocent and that her detractors were just trying to use her personal life to link her to the drug trade.

“Is that proof na (that) I’m involved [in] drug na may kinalaman ako dyan sa illegal drug trade sa Bilibid just because I had a previous relationship? Di ba that’s not proof…” she said, noting that her accusers had named her other alleged bagman, aside from Dayan.

“Pag bagman ka ba kailangan mo bang maging romantically involved (Do you have to be romantically involved with your bagman)…Is that proof? And theoritically, anyone can be a bagman assuming totoo yung claim nila na nakikinabang ako dyan sa drug trade na yan at allegedly may bagman ako (that their claims that I benefited from the said drug trade and I allegedly had a bagman are true ). Anybody can be a bagman, anybody identified with me—a relative , a staff, bodyguard, a driver.”

“But the point of being romantically involved at some point in my life, that’s not relevant. Kaya lang pinipilit nila yan kasi kasama yan nga sa panghihiya sa akin (Their insisting on my previous romance because it’s included in the character assassination against me), the misogynistic tendency of the President that he wants to portray me as an immoral woman. Dyan pumapasok ang double standard ng society natin (That’s when double standard in our society comes). Look who’s talking?” the senator added.

Asked if it was possible that Dayan had collected money for her without her knowledge, De Lima reiterated that while she believes that he would not do it, it was also possible that she was wrong.

“Although I want to believe hind nila gagawin yun di ba kasi baka ginawan din sila ng storya (they won’t fabricate stories but they did that before) but I cannot be sure, I’m not their keeper. I can’t guarantee their integrity,” she further said. RAM