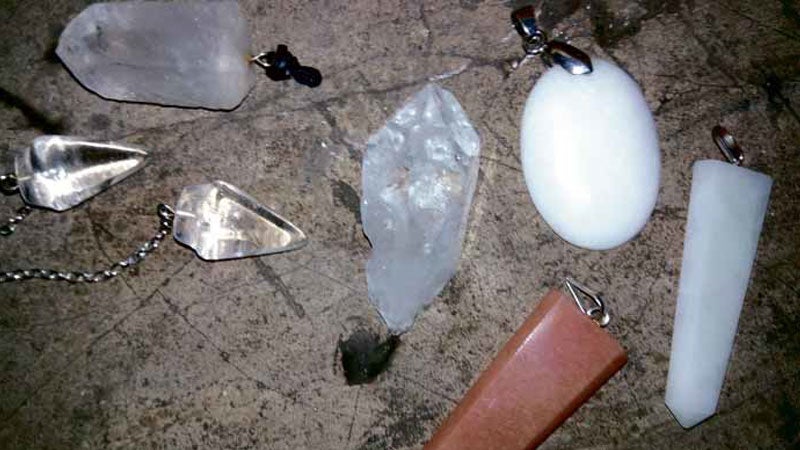 ENERGIZED? Some of the crystal stones used by occult practitioners in Tagbilaran City in Bohol province, who say the supermoon occurrence on Monday was the perfect time to cleanse them to acquire extra potency to heal. —LEO UDTOHAN

TAGBILARAN CITY—Astronomy enthusiasts were not the only ones patiently waiting for the supermoon to appear on Monday night. They were joined by occult practitioners, who were ready with their crystals so the Moon would recharge their healing abilities.

Edward Guyano, 42, prepared all his crystals—clear quarts, aventurine, hematite, jasper, onyx and other gemstones—on Monday afternoon in time for the expected rise of the supermoon, the brightest in 68 years.

He said the lunar occurrence was a good time to cast good energy for prosperity and love.

The phenomenon happens when the Moon is full and is at its closest point to Earth on its elliptical, monthly orbit.

About 7 p.m., Guyano laid his crystals on the flat surface outside his house in Barangay Agape, Loboc town, Bohol province, so the moonlight could cleanse his crystal stones.

But thick clouds started to appear and hid the Moon at 8:15 p.m.

Though it appeared briefly, Guyano said it was enough to cleanse and supercharge his crystals.

“The energy of a full moon is perfect” for the job, Guyano said. “But the energy of the supermoon is deeper and stronger.”

He said a full moon was the brightest and most potent point to release all unwanted energies from the crystals.

Guyano uses crystal stones to heal ailments. He has a crystal for each of the seven “chakras” (the centers of the body where energy flows). The crystals can transform the energy properties of the body.

This natural form of healing, according to Guyano, is often used today to relax and to relieve stress.

He explained that since crystals absorbed all the energy, including negative or unwanted energy, they need to be cleansed through natural sources of water like springs or rivers, or through the moon.

Guyano used to practice crystal therapy privately. But he was convinced by the manager of the Zoocolate Thrills Theme Park in Barangay Gotozon, Loboc town, to share his gift. He now has a small place in the park for healing.

While he doesn’t collect payment, the park management asks for donations.

Another occult practitioner, Lady Diana, was meditating on her terrace in Mansansa, Tagbilaran City, during the supermoon.

She was praying to the Moon for good health and prosperity.

Diana also said it was the perfect time to cast healing energy for her relative in Mindanao who is sick .

But nonoccult practitioners were also happy to see the brief appearance of the supermoon.

Charles Pesquira, 17, a resident of Tagbilaran City, was preparing his telescope as early as 5 p.m. on Monday.

To his disappointment, the heavy clouds hid the Moon and he thought he would not get another chance to see the

But Pesquira was surprised when the Moon appeared and brightened the skies. “It would happen in 2034, so I was happy I saw it.”